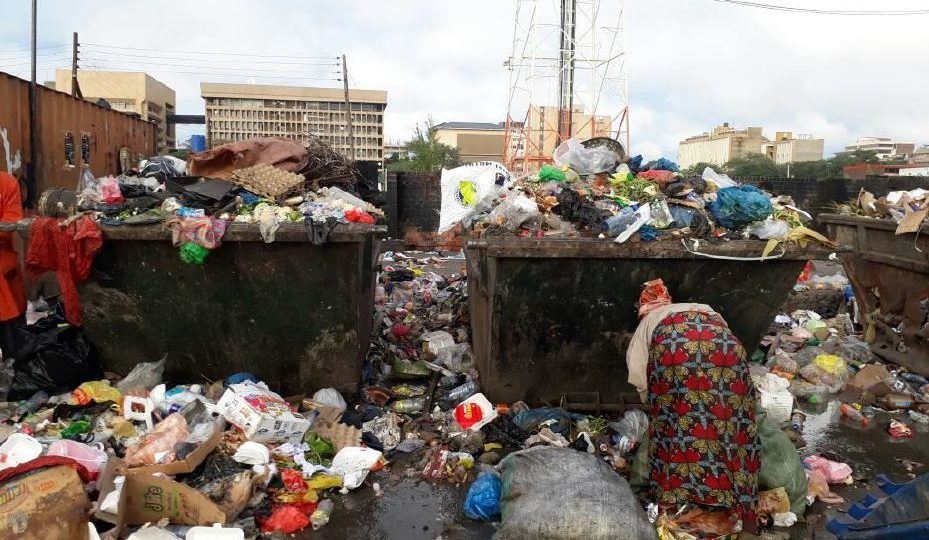 In the last 24 hours, they had 29 cases compared to the 68 cases recorded over the same period. There has been a cumulative total of 3,260 cases and 74 deaths.

Authorities have closed down businesses in epicenters of the Cholera outbreak in an effort to curb the spread of the infection. This has caused mounting tension, with some people, desperate and without limited choices, protesting

The epidemic has killed 70 people, and the current reported number of infections has climbed to 3,077.

CMMB was present at the cholera meeting this morning as well as the Oral Cholera Vaccine launch by the Minister of Health.

As of today, there have been a cumulative total of 2,905 cases and 67 deaths (the last happened in the past 24 hours but apparently was due to co-morbidity. A post-mortem is being done to determine the actual cause of death).

Of the 95 cases reported in the last 24 hours, 23 are children. A very sobering situation.

Batuke went on to say,

“As a country, we are facing a very difficult time, one that creates a level of shame while also acknowledging that there are actions that we may have benefited from doing much earlier before we were hit by cholera. The fight needs to start with us, community members, at household level. We need to keep our environment clean, work on policy that provides short and long term solutions and implement it. We are in a state of public health emergency and we recognize that there is a lot we can do but we cannot do it alone. We need all hands on board so we can have clean water, acceptable sanitation and behavior that supports a cholera free environment! We cannot afford to lose another life! It is my humble plea that people, organizations and governments who have stood by us and more, will continue to join hands with us as we fight this epidemic!”

This morning,  Zambia’s Minister of Health, Dr. Chilufya reported that the country has now recorded a cumulative total of 2,802 cases with 218 under treatment countrywide. The death toll has reached 66 people.

The number of cholera cases continues to rise in Zambia, with 108 new cases recorded today bringing the accumulative number to 2,600.

Zambia’s Minister of Health Mr. Chitalu Chilufya explained that due to the rising number of cases the government has banned all gatherings, including church services and funeral gatherings, in cholera epicenters. People living outside of these epicenters are being advised to practice preventative measures.

Minister of Home Affairs Stephen Kampyongo has announced the suspension of operations for the Departments of National Registration, Passport and Citizenship offices, as an enforcement of SI number 79, which restricts public gatherings in the wake of a severe Cholera outbreak.

With immediate effect, all registration offices in Lusaka will be closed to the public.
Registration officers will only attend to requests for emergency travels.
The minister said that this suspension is temporary, and the general public will be informed when the situation will be reviewed.

One hundred more cases of cholera have been recorded in the last 24 hours, according to a statement issued by Zambian Health Minister, Dr. Chitalu Chilufya on Friday morning.

The following information has been provided by the Zambia National Public Health Institute and the Zambian Ministry of Health.

Cholera Outbreak in Zambia: No Signs of Slowing

Zambia is in the midst of a cholera outbreak. Originally declared on October 6, 2017 in Lusaka, the response was escalated on December 20th and the spread shows no signs of slowing.

The cumulative number of reported cases in Lusaka as of January 2nd is 1,901, with 48 deaths, resulting in a high case fatality rate (CFR) of 2.4 percent. The CFR rate is a measure of the severity of a disease. It is defined as the proportion of reported cases of a specified disease or condition that are fatal within a specified time. With proper and timely treatment, the case fatality rate for cholera should remain below one percent. 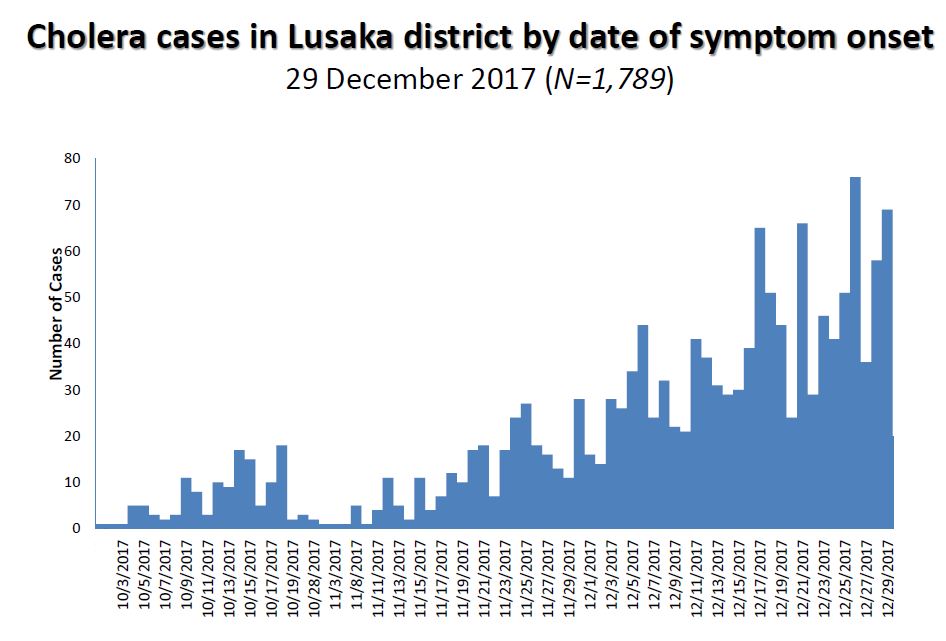 The CFR for the Spanish (1918) flu was >2.5%. This flu pandemic was the deadliest in modern history and infected approximately 500 million people worldwide and killed an estimated 20-50 million people. 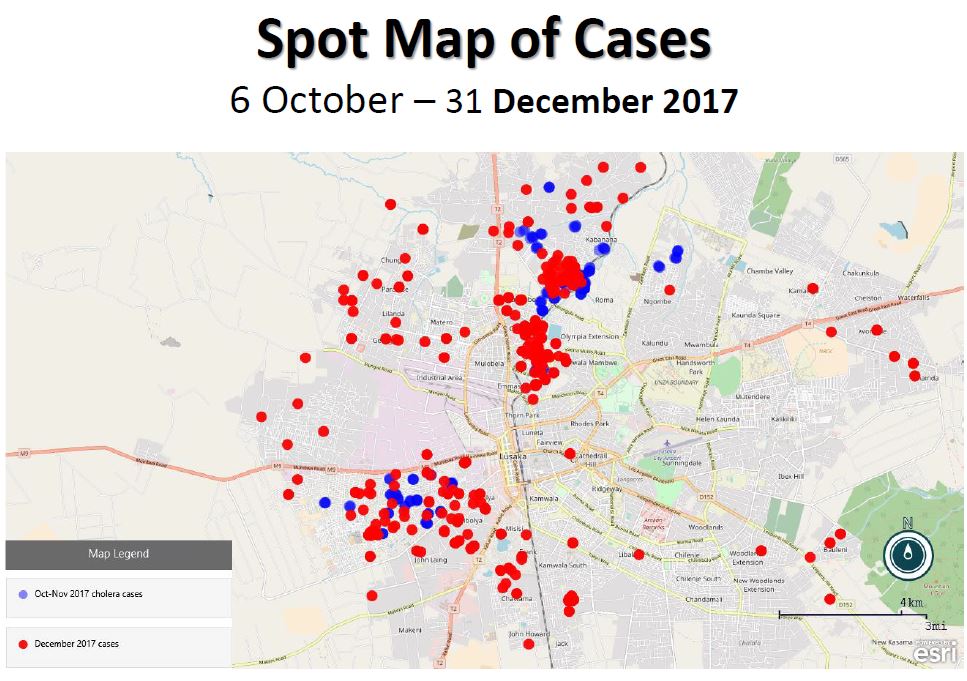 According to the World Health Organization, cholera is an acute diarrheal infection caused by ingestion of food or water contaminated with the bacterium Vibrio cholerae. This bacterium is usually found in water or food sources contaminated by feces from a person infected with cholera. It is most likely to be found and spread in places with inadequate water treatment, poor sanitation, and inadequate hygiene.

Symptoms include diarrhea, vomiting, leg cramps, and dehydration. These typically appear within two to three days from date of infection. Cholera can be treated by replacement of lost fluids and salts. With prompt re-hydration, fewer than one percent of cholera patients die. However, it is estimated that one in ten infected persons will experience severe symptoms, leading to rapid loss of body fluids which causes dehydration and shock. Without treatment, death can occur within hours.

Researchers estimate that there are roughly 1.3 to four million cases, and 21,000 to 143,000 deaths worldwide due to cholera. It remains a global threat to public health and is an indication of inequality and lack of social development.

Several measures are being taken in an effort to help safeguard lives and prevent further spread of this deadly disease. Schools, including universities in Lusaka and impacted areas, have been closed indefinitely. The sale of fresh foods, including meat, chicken, and fish on streets, has been banned. Several restaurants and other sites found to be contaminated have been closed until further notice. 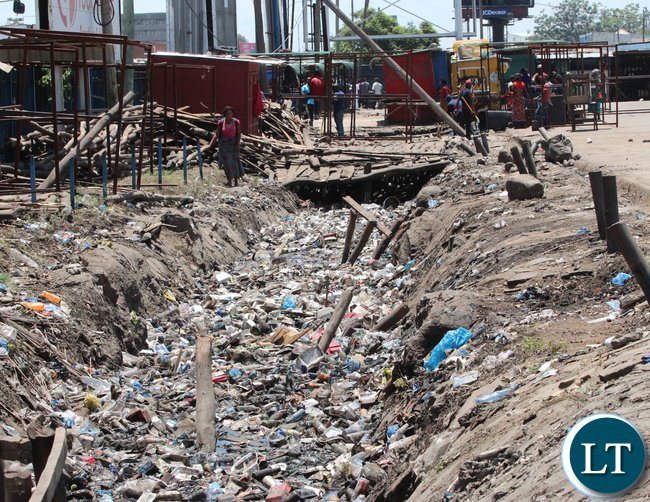 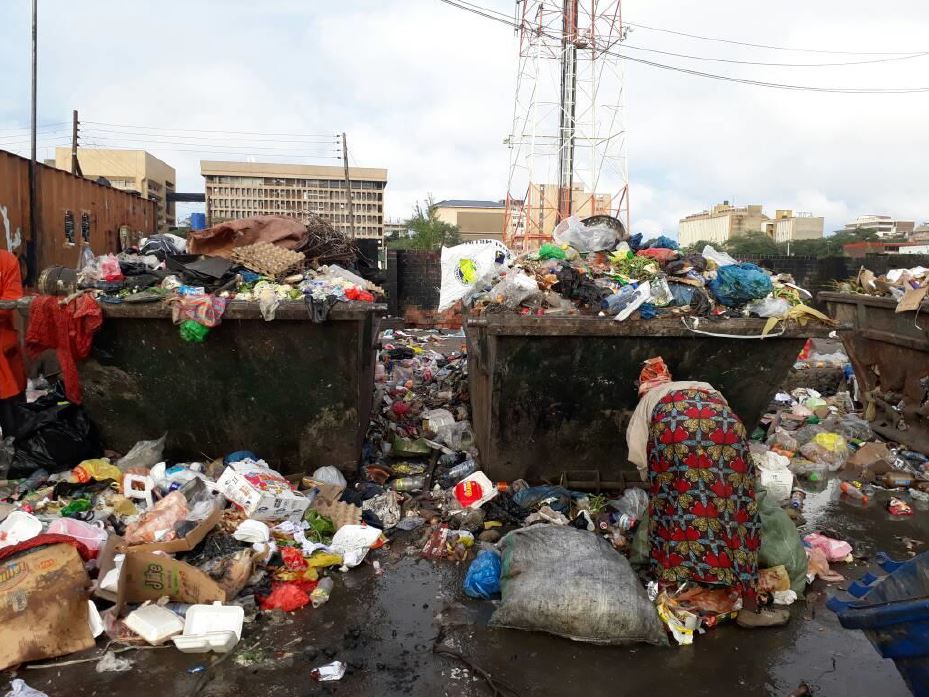 Insufficient waste management is being identified as one of the causes of the cholera outbreak. Photo credit: Zambia National Public Health Institute 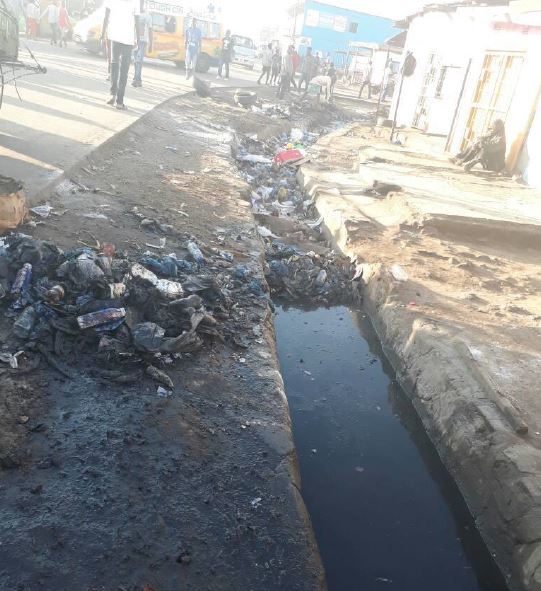 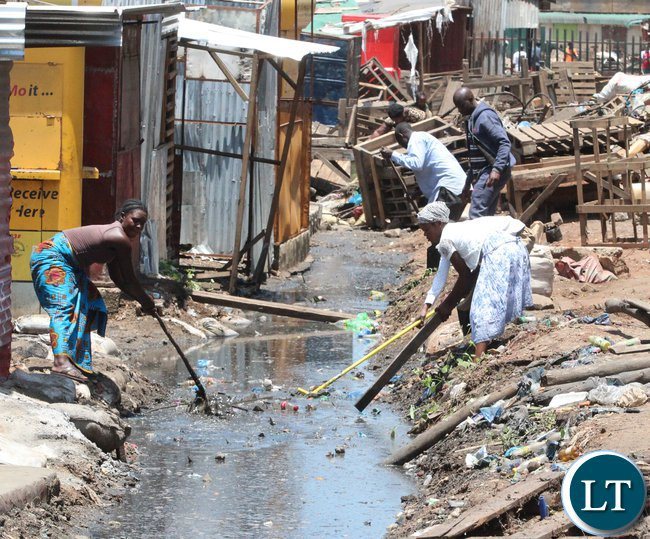 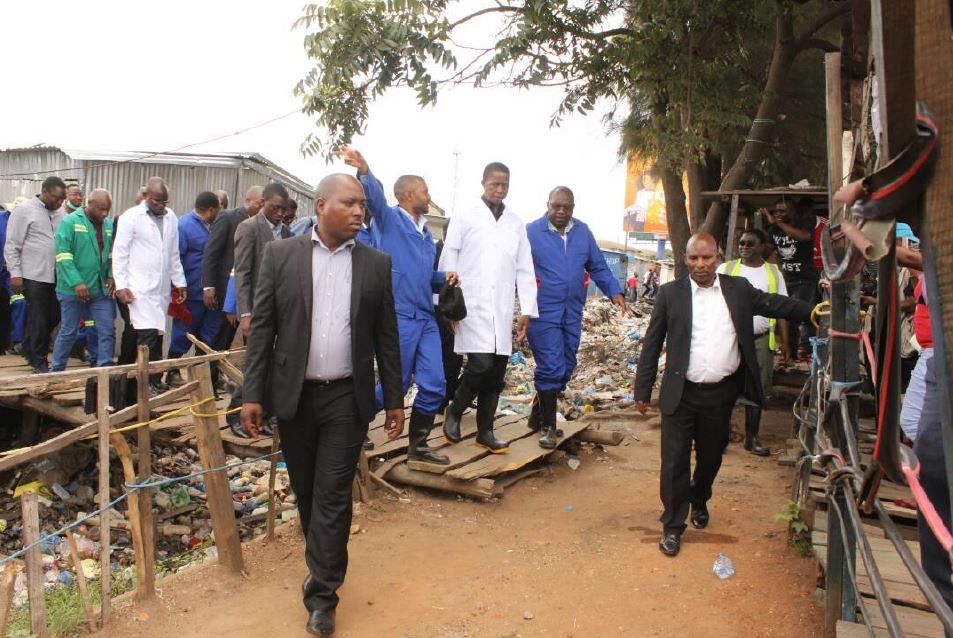 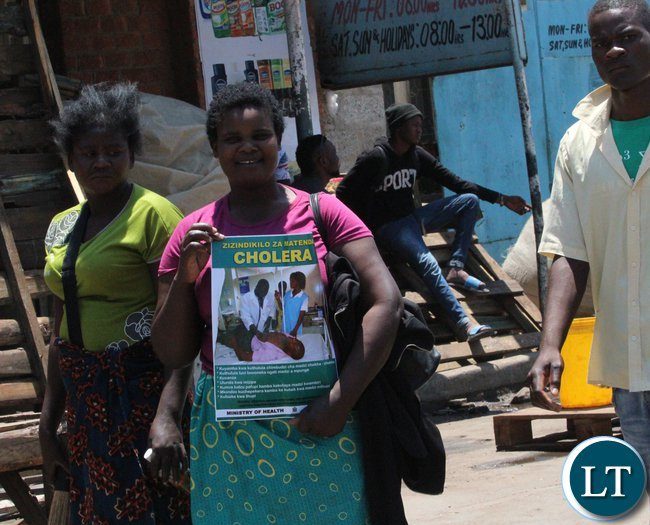 Efforts are being made to raise awareness in affected communities. Photo credit: Lusaka Times

Economic analyst Chibamba Kanyama has warned that the cholera outbreak in Zambia should be treated as a real crisis that may result in an economic catastrophe. Kanyama said, “Cholera is no longer just a disease associated with high density communities of large cities but has also spread to the suburbs. For the first time since cases of cholera affected Zambia in past decades, there are now mentions of actual sources of the problem of which ‘upmarket’ takeaway food outlets such as Wimpy and Hungry Lion have contributed. Soweto Market, Zambia’s leading farm produce distribution center has been shut, with the Zambia National Farmers Union already lamenting the huge losses that farmers are incurring. Very soon, the limiting of public gatherings will be extended to supermarkets whose daily sales are in hundreds of millions of Kwacha. Should this happen, VAT collections by the Zambia Revenue Authority will be impacted.”

The Ministry of Health is collaborating with WHO and partners to control the outbreak, with six local incident command posts currently operational in Chawama, Chipata, Kanyama, Matero, Chelstone and Chilenje, each lead by a public health specialist. The Zambia National Public Health Institute (ZNPHI) is leading investigations into circulating strains and patterns of transmission among patient clusters. They are also conducting knowledge, attitude and practice surveys and residual chlorine testing in Chipata and Kanyama, a mortality review, and a case-control study in Chipata. WHO has donated oral rehydration solution, intravenous fluids and giving sets, antibiotics, diagnostic kits, cadaver bags, and gloves to cholera treatment centers. Centers will be assigned additional clinical staff to provide 24-hour staffing.
Lusaka City Council had collected more than 2,000 tons of waste and emptied nearly 100 septic tanks. More than 1,000 pit latrines will be emptied, and 148 shallow wells have been targeted for closure. One of the biggest risk factors for continued spread of cholera is the consumption of unsafe water from shallow wells. There is resistance from communities to cap them due to the lack of alternative water supplies. Inspection of premises is ongoing, along with disinfection of houses, toilets, and distribution of chlorine solution and soap. Contact tracing is ongoing and contacts of 1,032 cases have been traced so far. Human resources (medical and environmental health students and environmental health technologists) are being deployed to support water, sanitation and hygiene interventions in Chipata, Garden, and Kanyama.
There have been six press briefings, and cholera prevention information has been communicated to the public through radio broadcasts. Educational outreach to the affected communities is ongoing.

CMMB is currently mounting a response in collaboration with Procter & Gamble and other partners.  Our efforts will focus specifically on water and sanitation. Keep checking CMMB’s website for updates.

Learn More About Our Work in Zambia