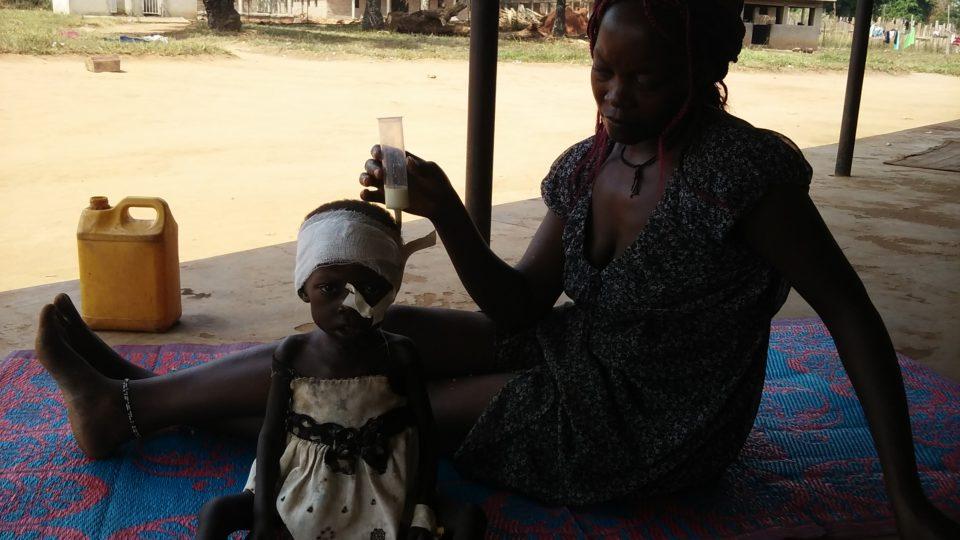 Carrie Flaherty is one of our international volunteers serving at St. Therese Hospital in Nzara, South Sudan. Here she reflects on a very young patient named Jenifer and how her story highlights the reality for people seeking care in low-resource countries.

In Desperate Need of Care

Sometimes, when I walk through the pediatric ward at St. Therese Hospital, a child will catch my attention as clearly in need of special care. Jenifer was one of these children.

I could see the outline of nearly every bone of her tiny body. She was suffering from severe acute malnutrition (SAM). At 19 months, Jenifer was only 6.6 kg (14.5 lbs) and her mid-upper arm circumference (MUAC) measured only 9.2 cm  (3.6 inches). To put that into perspective, the average healthy 19-month-old child will weigh 23 pounds and have a MUAC of 13.5 cm (5.3 inches). Jenifer was very sick. 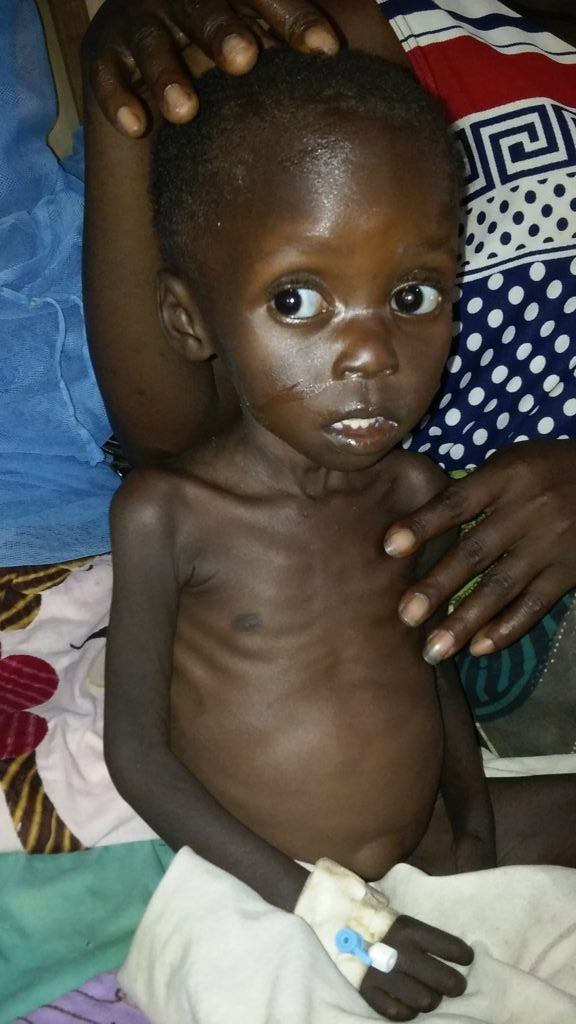 As is typical of many children with SAM, Jenifer showed no interest in her surroundings and stared blankly at the world. She was unable to talk or walk, and could only sit upright for short periods of time before flopping over on the mattress. In addition to the SAM diagnosis, Jenifer had persistent diarrhea, vomiting, fever, and cough.

In addition to antibiotics, we started Jenifer on F75 formula every three hours to combat the severe malnutrition. F75 is the starter formula for children in Jenifer’s condition. In this fragile state, malnourished children can only tolerate a special proportion of nutrients to safely recover. She then transitioned to F100 formula, the “catch-up” formula. Once Jenifer was stable, her body could handle the higher amount of calories and protein contained in F100. Unfortunatley, feeding proved to be difficult. Jenifer was refusing to drink – another common behavior – and Evonne’s attempts to feed via syringe were challenging. Jenifer continued to lose weight, dropping to 6.2kg (13.6 lbs) with a MUAC of 9 cm.

To ensure that Jenifer got the nutrition she desperately needed, and to reduce her mother’s desperation to see her daughter get better, we inserted nasogastric tube. Every three hours during the day, I would seek out Evonne and Jenifer wherever they were on the hospital grounds and feed Jenifer.

This was not only to ensure Jenifer was receiving the treatment she needed, but also to encourage Evonne to take care of her child. Seeing her child so ill was making Evonne lose hope. She was detaching herself – again, not uncommon for moms who saw their children slipping away. I couldn’t predict Jenifer’s future, but I wanted Evonne to see that though her child’s life might be short, there could be moments of joy. The length of a life does not determine its value.

For as long or as short a time Jenifer had, she deserves to be cherished. 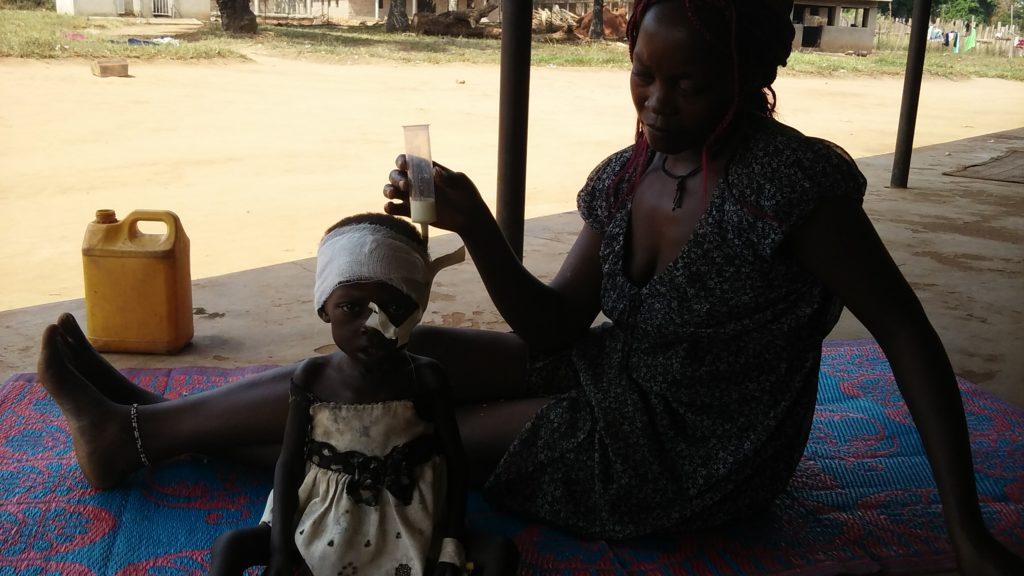 After a few days, Evonne became confident enough to feed using the tube herself. Jenifer began to gain some weight and was becoming increasingly interactive. She started to recognize me, and would even produce her hand for me to measure her pulse. When Jenifer managed to pull out her feeding tube overnight, Evonne asked that we not replace it. She wanted to let her try and feed Jenifer by mouth instead. 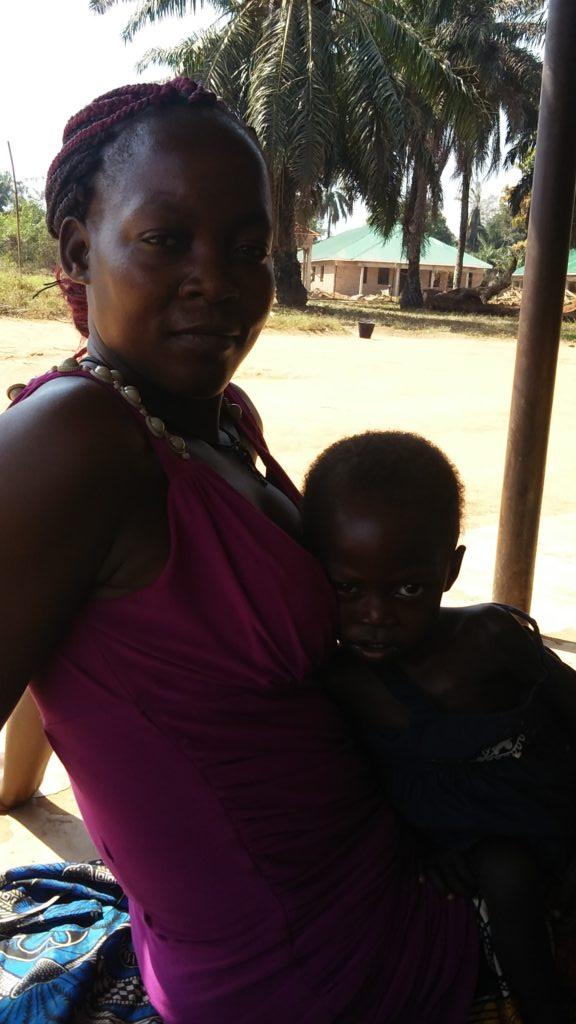 I would have liked to keep Jenifer at the hospital for a little longer to make sure she continued to improve, but when Evonne requested to go home and she was released. Many times the length of a child’s admission is affected by the needs of the rest of the family at home. It’s not easy for mothers, who often carry the brunt of the responsibilities at home. Upon being discharged, Jenifer and her mother were linked to the outpatient feeding program. Now we hope that Evonne will seek and get the care she and her daughter need.

Learn about our programs in nutrition