A Pearl in the Antilles: My Visit to Haiti 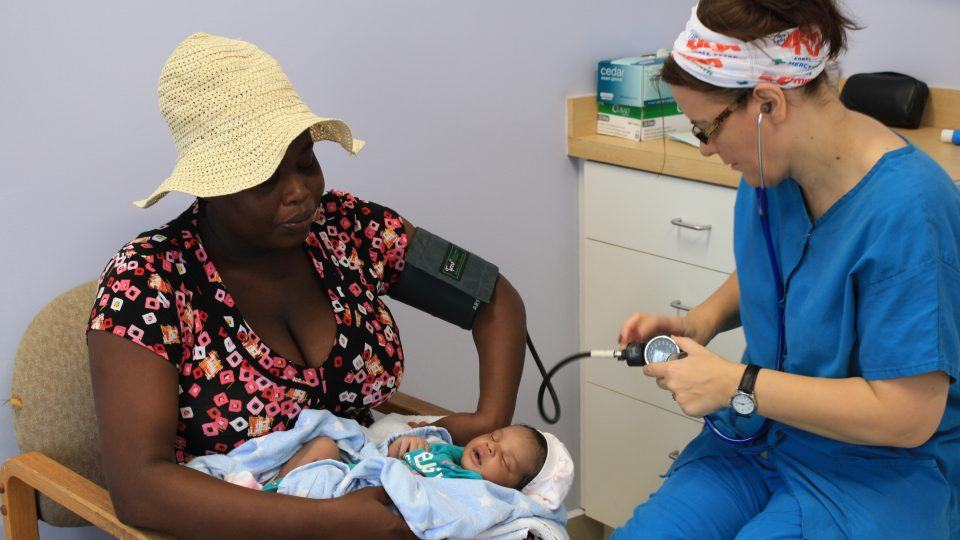 Haiti is a country often talked about but rarely visited. Driving through its streets in March, I witnessed a battle between refuse and humanity – and the trash is winning. The country speaks about its recent history in two halves, BE (before the 2010 earthquake) and AE (after earthquake). Haiti reminds me of a favela in Brazil or Dharavi in India.

And like the periphery of those stories, you can see light breaking through the darkness.

Mylove is a CMMB angel and junior member of the community close to the new hospital.

I was blessed to ride along on a donor impact trip with CMMB – Healthier Lives Worldwide (Catholic Medical Mission Board). At the trip’s start, I found myself on a bus alongside donors, staff, Catholic healthcare executives, and sophisticated strategists, all investing themselves into solving for Haiti’s daunting but surmountable public health problem. I heard familiar yet technical words about sustainability, transformative change, solar panels, reverse osmosis, education, and maternal and child health. There was an enthusiasm on the bus, disturbed only by donors swatting away lethal mosquitoes from their faces. An enthusiasm inspired by the chance to see CMMB’s latest work: a new hospital in Côtes-de-Fer. Four hours outside Haiti’s capital of Port-au-Prince, the hospital is a $4 million project that brings hope and healing to a truly remote part of the world.

We had ventured from the hotel at 5 am for a day of driving, reflection, and celebration. The roads before sunrise were packed with people on their long walks to work, some traveling for two hours in each direction. Cars, bikes, street food, and piles and piles of trash. Other than small street fires, there was no light, and no electricity available for miles.

Past the congestion, we made our way into the country, which felt as though we could be anywhere else on earth – beautiful mountains, streams, rice paddies, dirt roads, beaches. Although gorgeous, it reminded me of Charrière’s depiction of Devil Island in 1969’s book Papillion. The mental anguish of looking out at a paradise rivaling the horrific torture behind the walls. This situation felt similar for those living here, looking out at divine beauty but imprisoned by the extreme poverty.

We passed through a barbed-wire fence to arrive at the hospital where hundreds of local Haitians, dressed in their best, waited under a big tent. In attendance were priests, the town mayor, town elders, and local volunteers. Two hours of speeches, in French and Haitian creole. It felt like I was attending a Latin mass – though I felt the Holy Spirit working, I had no clue what the speakers were saying, but I was drawn in.

Next was a tour of the hospital and guest house, the ribbon cutting, and a stroll through the new pharmacy. It was clean, pristine, the shelves filled with mostly generic medicines, everything from prenatal vitamins to hemorrhoid cream.

Let’s put this into perspective!

Haiti, an incredibly poor country, where poverty pervades everything: crumbled infrastructure, no electricity, no clean water, some people actually living in dirt caves. Lottery stands were every where, ransoming hope for a dollar. Deadly mosquitoes hunt their prey at dusk. Trash piles stand taller than buildings recently rebuilt after the devastating 2010 earthquake that killed 250,000 people. And yet – here is this beautiful “beacon of hope and humanity” (as one town elder put it), a hospital with clean beds, an x-ray machine, surgery rooms, dentistry equipment (chair and all), electricity, WiFi, even clean labor rooms with plush teddy bears in the infant warmers. The celebration under the big tent that day was not for CMMB supporters – this was a local victory!

CMMB impressed me. Their best staff are on the ground, serving the most vulnerable. They’re embedded in the local communities, native to the culture, working in concert with partners locally and abroad. Although CMMB normally implements systems that exemplify these strengths rather than building the facilities, they did a damn good job at both here. The donors are engaged around a shared vision now. The conversations coming back on the bus were pragmatic and purpose driven, about hospitals sending residents for rotation, mid-wife training, corporate engagement, Father Joseph Sullivan’s legacy, and a remote hospital serving as an epicenter for both health and faith.

Kerna is a community health worker in Haiti who has saved lives.

Parallel to this enlightening experience, I must admit a frustrating tension. It felt tense for me to visit in such a bubble. This was not created by CMMB nor any of the aid organizations visiting Haiti, but is instead a reflection of the local political and economic climate. I felt like I was in the bulletproof Pope-mobile. From the moment that you arrive, you fly into an air-conditioned airport, get into an air-conditioned bus, which then drives into the secure parking lot of a beautiful westernized Marriott behind gates, walls, and armed guards. The next day, you’re back on the air-conditioned bus, through the gates, driving through the countryside, past the barbed wire fence to the hospital… repeat until you fly back out.

The most I was able to pierce the veil was exiting the bus mid-journey with my peers to push a stalled truck out of the road so we could continue driving.

On the way back to Port-au-Prince, after the dedication, a bus carrying many guests encountered a broken down truck. Everyone got out to give a push.

Oh, and the impromptu bathroom break to bless a local tree! I was craving interaction. Across the street from the hotel was a coffee shop. Equipped with a $10 US bill, zero fluency in Haitian Creole, and a healthy coffee addiction, I was excited to venture out for a black coffee before my exit to the airport – but alas, they were closed, no interaction to be had. The tension shall remain.

“The insularity is unfortunate, and I couldn’t stop thinking about the Gospel of Luke, with Lazarus at the gate of the rich man (Luke 16:19). I understand that the local Marriott was just a metaphor — but maybe the metaphor is bigger than that, and maybe Haiti is sitting at our gate. What are we doing for them? Are we caring for them? How?”

We are equipped with riches, ingenuity, and generosity. What can we do about the trash? What about Haiti’s utilities? What social enterprises are yet to be uncovered to tackle significant systemic problems? I get that the “pearl of the Antilles” (former name for Haiti) has been stripped. But what about the resources they have in abundance, like peanuts or conch?

I am not talking about sending neckties to Haiti (as I’ve heard of some non-profits doing). I’m talking about much more with much less: basic needs for humanity. Look for what is bringing a smile to the faces of the hopeless children. Who is giving them a chance? Food, nutrition, water, education – these are all bigger and worthy questions to ask, and I’m thankful that warriors like CMMB are there.

One last thing that I loved about CMMB is that they are targeting (and reaching) the vulnerable rural populations. Their CEO, Bruce Wilkinson, gave a humble speech in which he reminded the audience that “their best staff are not in the capital cities” – instead, their best are in the rural areas serving the least of these. A town elder at the ceremony was bellowing into the microphone a rallying cry about the hospital representing more than a health center, to raucous applause.

Well done, CMMB. Build more. Keep delivering hope. Thank you for the opportunity for NCF/NY givers to serve you in your mission. 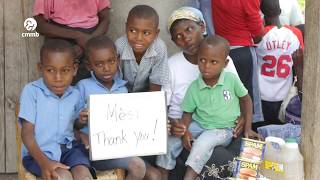 Here are ways that you can support this great organization.

$2.5 million for Phase 2 to include Solar System, Community Center, Professional Staff Housing and medical equipment including Digital X-Ray for telemedicine transmission and remote reading and diagnosis by Radiologists in USA

They need your help in many locations, with opportunities for both individuals, corporate teams, and missionaries to participate.

Believe me, Haiti will need more than money. Please pray for the people of Haiti, and that nothing snubs the lighthouse that CMMB has created there.

CMMB is doing amazing work, and people are invited to come along in this story. Tell your friends.

Jeff Smith is the president of National Christian Foundation – New York. He advises individuals, companies, and non-profits on maximizing impact.