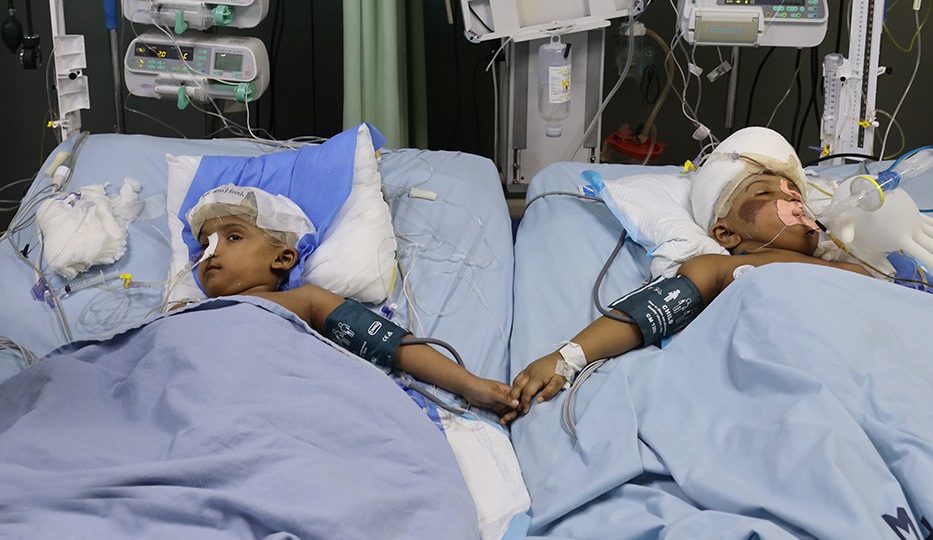 Doctor Gergely Pataki established the Action for Defenceless People Foundation in his native country of Hungary in 2002. Initially, the Foundation worked to provide special plastic and reconstructive surgeries to the disadvantaged who could not afford them. Most of the operations are provided to children with congenital defects. The staff then conducts rehabilitation to set the children back on a developmentally healthy track.

In 2010, the group opened an international arm of its operation. The organization now regularly sends teams to Bangladesh where they have performed over 500 surgeries. They recently expanded to Nigeria as a surgical destination as well. The Foundation works with communities who don’t have adequate medical resources and would be unable to afford such specialized surgeries even if the resources did exist. 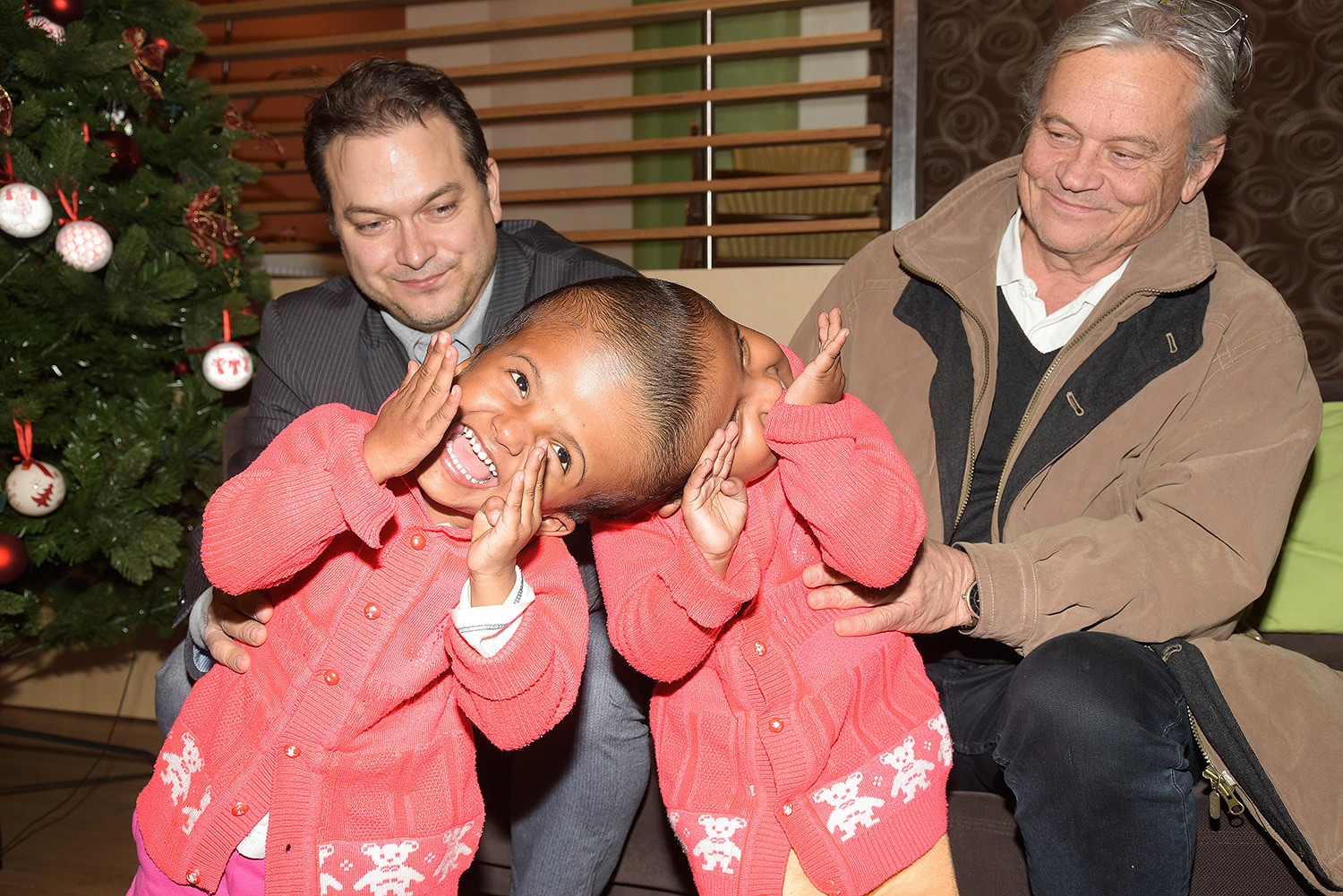 Rabeya and Rukaya conjoined with Dr. Pataki and Dr. Csokay before their surgery

In 2019, the Action for Defenceless People Foundation and the CMMB Medical Donations Program partnered to organize the donation of supplies required for a series of surgeries planned for the separation of conjoined twins identified in Bangladesh by the organization. The three-year old sisters, named Rabeya and Rukaya, were craniopagus twins, meaning they were born with their skulls fused together. The twins came from a poor family who had no resources for the incredibly expensive operation required to separate them. After meeting Rabeya and Rukaya, the Foundation made plans to bring them to Hungary to perform the surgery.

The Duragen Plus Adhesion Barrier Matrix is a product made by CMMB donor Integra LifeSciences, Inc. It is utilized in advanced cranial surgeries to cover incisions and promote structurally sound cell growth of the skull and surrounding tissue during recovery.  CMMB also procured specially requested test kits to support a surgical mission to Bangladesh the Foundation was planning for later in the year. 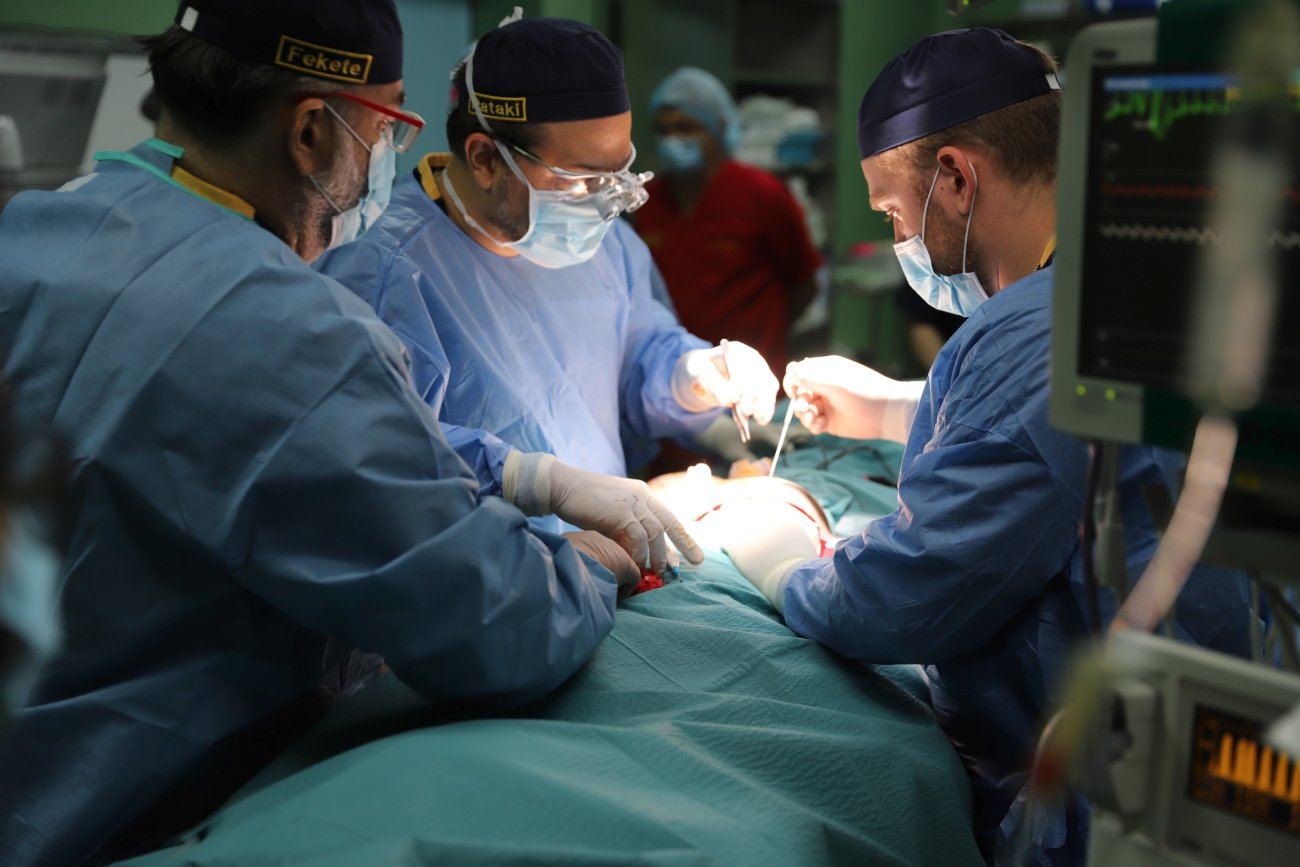 For 33 consecutive hours on August 1 – 2, Dr. Pataki and a medical team lead by Dr. Andras Csokay successfully operated to separate the twins. After a month of recovery, the surgeons performed the first of a series of reconstructive procedures.

In November, the twins began conductive education, also fully covered by the Foundation. This is a treatment method of rehabilitation that equips children with neurological and mobility impairment to consciously perform actions normally learned through life experiences in infancy and throughout childhood. The treatment places an emphasis on problem-solving and developing a self-reliant personality. 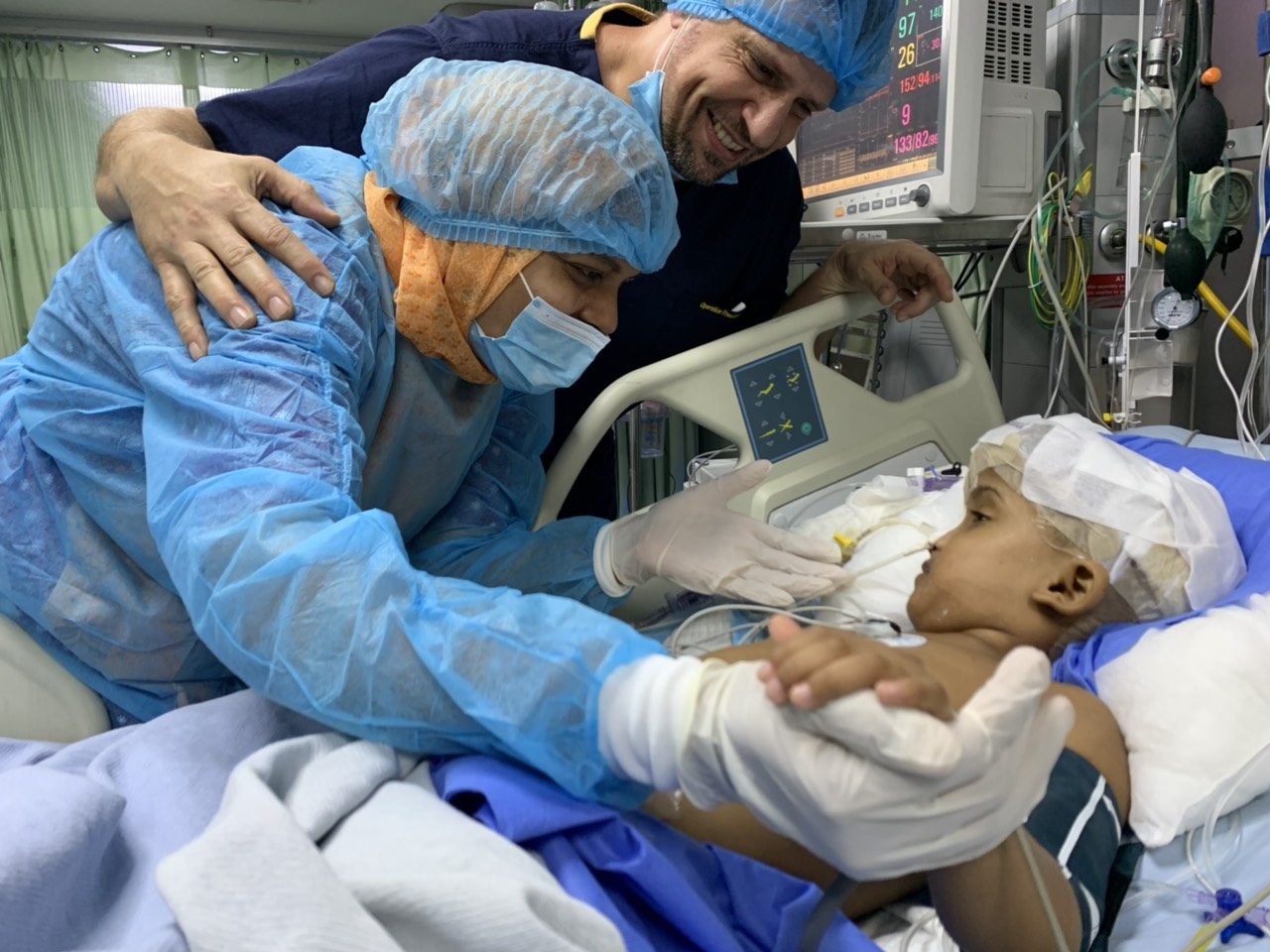 Rabeya first seeing her mother after her surgery

In December, the family returned to Dhaka with a team of five doctors and a pediatric psychologist. Here, the surgeons performed another set of reconstructive operations that included cranial vault implants and tissue expander implants. This was followed by continuing rehabilitation and work to ensure that Rabeya and Rukaya had all the resources they needed to continue their recovery and development in their home. 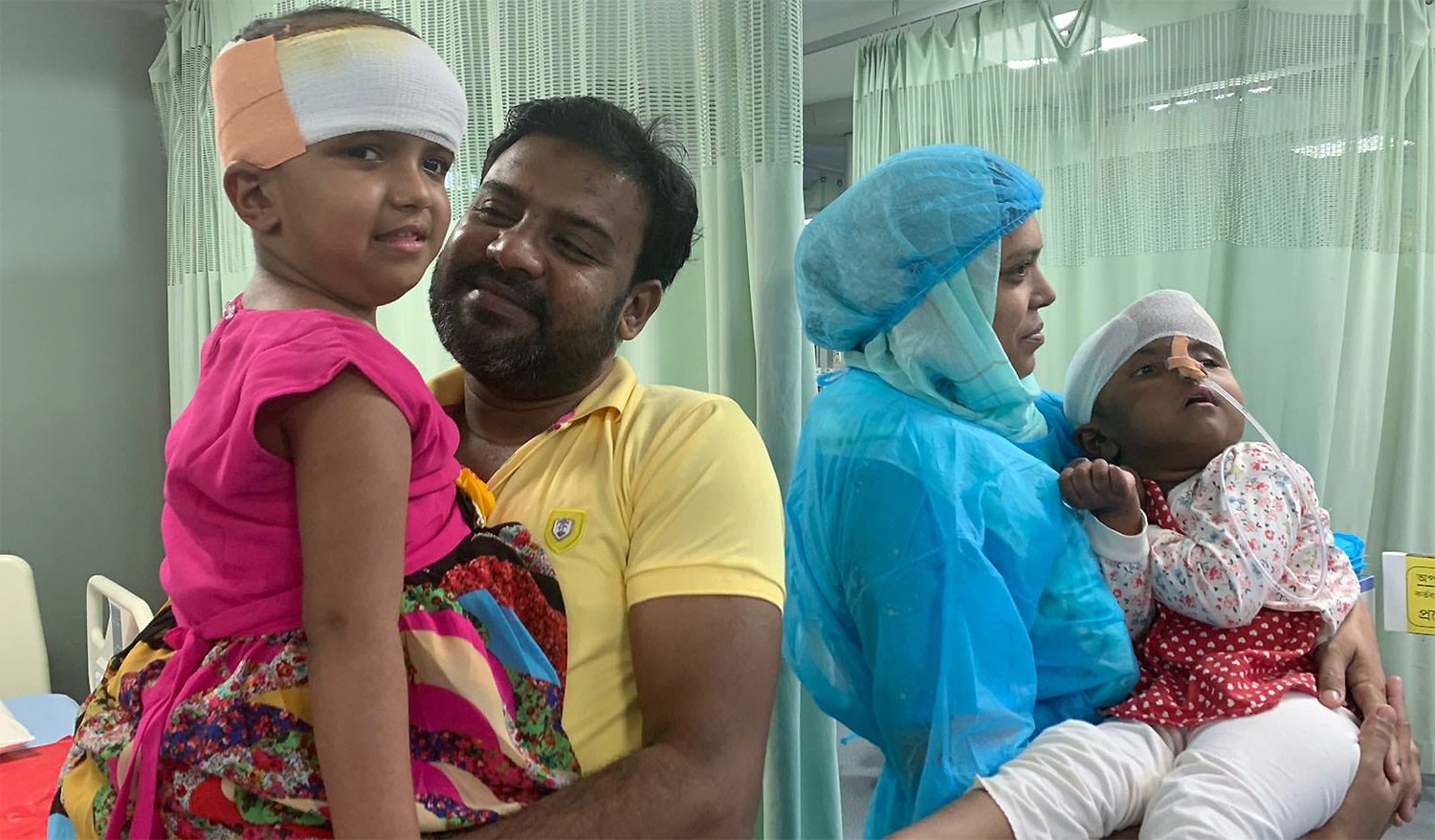 The twins with their parents after surgery

The Power of Partnership

As they lay in their beds post-operation, the twins reached for each others hands. They will never be physically conjoined again, but their bond is unbreakable. 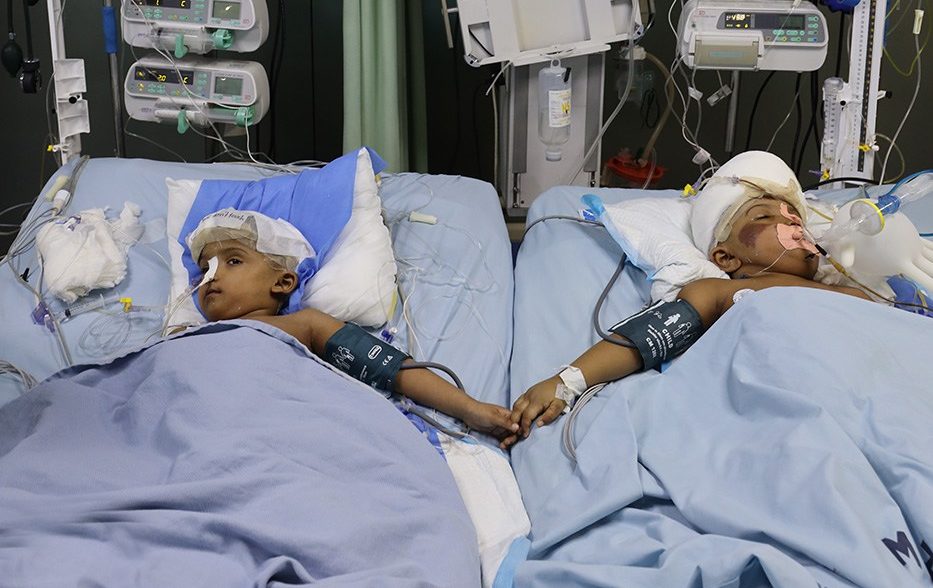 For Rabeya and Rukaya, a better life is possible because of the hard work of Dr. Pataki, Dr. Csokay, their team, and the donated medical supplies from CMMB. It’s these individual stories of lives changed that drive our mission forward. But we can only accomplish this together.

We are humbled to serve the communities and patients that we reach through the Medical Donations Program, which has the primary objective of increasing access to quality healthcare in the developing world. CMMB has been dedicated to helping the poor and those marginalized in society for more than a century, and accomplishes its mission through partnerships.