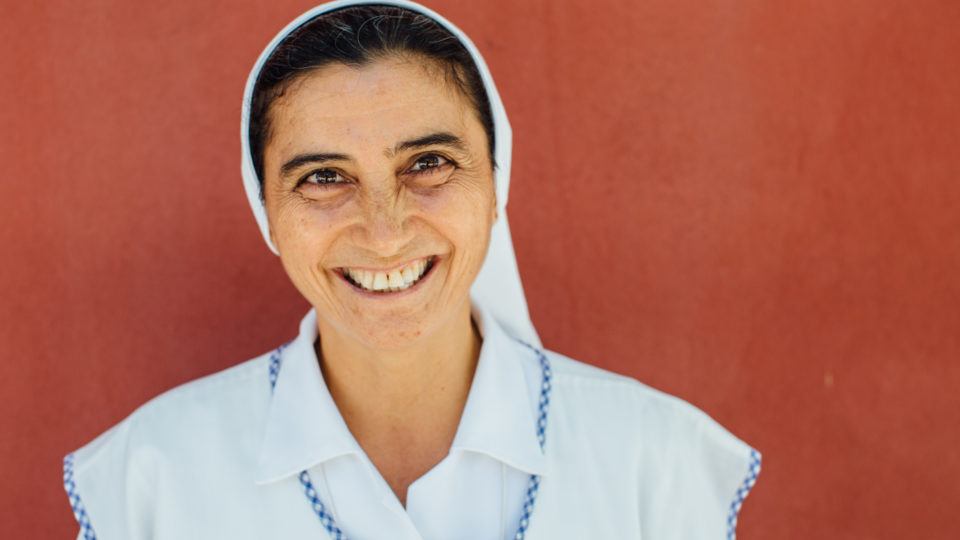 March 8th to 14th is National Catholic Sisters Week – an opportunity to highlight the contributions, compassion, and legacies of women religious. To help celebrate, we have been highlighting different women religious whose dedication and love touch our work around the world. Today, we share the story of Sister Maria in Haiti.

Sister Maria first came to the Rosalie Rendu Health and Nutrition Center of Cité Soleil, in 1998. Since then, she’s served on and off here for the past two decades. We know that her story will inspire you and serve as a reminder of the beauty of humanity.

Those lucky enough to meet Sister Maria will quickly receive a firm, gripping embrace followed by a large, sweet smile. But to catch her, you’ll have to linger somewhere between the vaccination rooms and the main waiting area at the Rosalie Rendu Heath and Nutrition Center, in Cité Soleil. As she races to and from, she’ll notice your new face in her familiar pathway. Don’t worry, she always makes time to stop and offer a memorable welcome to all those who come to visit.

Today, she says, the clinic is quiet. Yet, approximately 50 women still wait with their children either outside under a shaded awning, or inside near the examination rooms. The recent election means more violence in the streets of Port-au-Prince slum, Cité Soleil, and therefore a greater risk for families leaving their homes. The number of patients for the day, high or low, doesn’t really matter for Sister Maria. She always has work to do. Still, she never ceases to greet people with genuine interest and an outpour of joy. 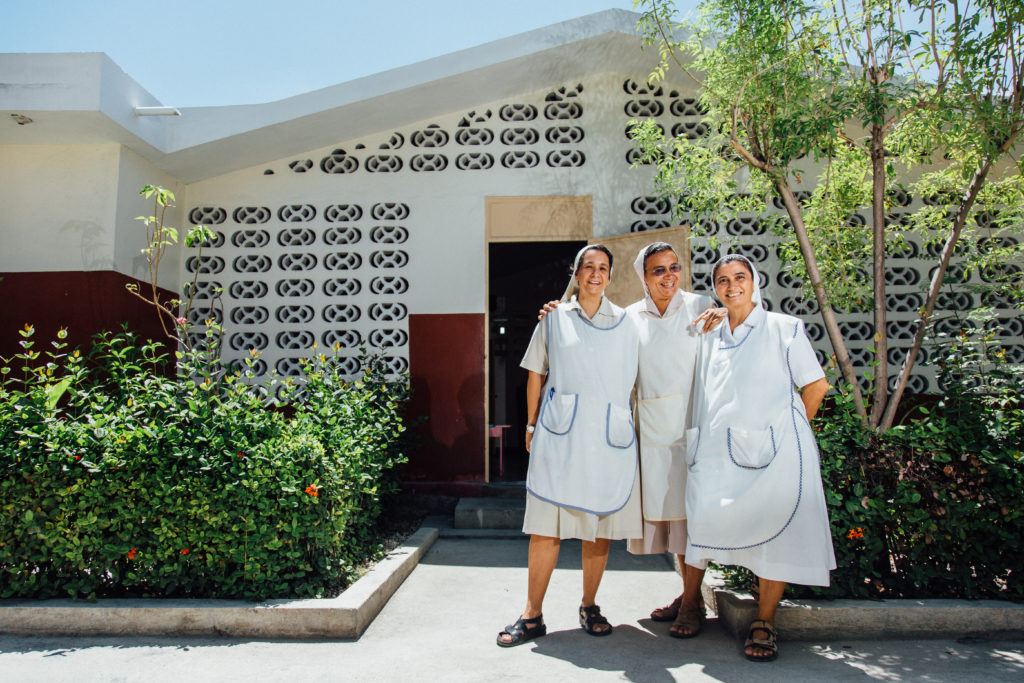 Born in Brazil, Sister Maria tells us she is 56 years old, but, 57 if you count the nine months she spent in the womb. She is a small woman with sparkling eyes. She answers questions thoughtfully before politely excusing herself to see to something in another building, then rejoins us in time to offer water, cold sodas, and crackers. Sister Mary insists that we put away our phones, cameras, and notebooks to enjoy a moment of rest. A defining characteristic of Sister Maria- she is never afraid to say what she thinks.

“I’ve never tried to please anyone. I say what I need to say.”

Sister Maria knew early in life that she wanted to become a Catholic sister. One night when she was 13, she saw something on television that would forever change her life. A news update, covering Ethiopia came on describing and showing the devastation of drought and malnutrition. Sister Maria knew someday she would give her life to helping those in similar situations. “I said I want to help them and there is no better way to help them than to be a sister.”

Her friends told her she was crazy. Growing up, Sister Maria loved makeup and carnivals, and having fun with her friends. But, she told them that what she wanted to do was bigger than all of that stuff. She could and would give it all up. Not for herself but, because she felt called to do so.

Through high school, Sister Maria remained determined to fulfill her calling. She visited with sisters and priests to learn more and ask questions, and when she was 18, she began her new life. In her first job, Sister Maria worked with cancer patients. It was not easy work, she says, but she found joy and peace in what she was doing. “I had the confirmation that this is exactly what I wanted to do,” she says.

“Vocation is the donation of God. God chose me.”

Sister Maria works from a place of immense gratitude for the vocation she has been given, and for the God she serves. She is unafraid of the hurt and pain she may face because of the confidence she maintains in the work put before her. These attributes serve her well in her current role in Cité Soleil.

I met Sister Maria during a field visit to CMMB Haiti. She told me that one night, when she was 13, she saw something on television that would change her life forever. A news update covering Ethiopia showing the devastation of drought and malnutrition. That day she decided she would give her life to serving others. Sister Maria, born in Brazil, first came to Haiti in 1998. Those lucky enough to meet her will be greeted with a firm embrace and sweet smile. But to catch her, you’ll have to linger somewhere between the vaccination rooms and the main waiting area as she races from patient to patient. She reminds us that her purpose is not contingent upon the outcome of her work – to heal the sick – but on the reality that there is always someone in the world to care for. – Diane Hoey, CMMB volunteer

Known as one of the most dangerous areas in the Western Hemisphere, Sister Maria says insecurity is a huge issue affecting every aspect of life for those living in Cité Soleil. “Everyone is manipulated in Cité Soleil. The gangs run everything,”

It’s estimated that almost half of all the girls in Cité Soleil and the country’s other ‘conflict-zone’ slums, have been raped or subjected to other sexual violence. Many young women also turn to prostitution in order to support themselves financially. In both instances, the rate of pregnancy and HIV infection in Cité Soleil remains high with minimal options for mothers to support their growing families. 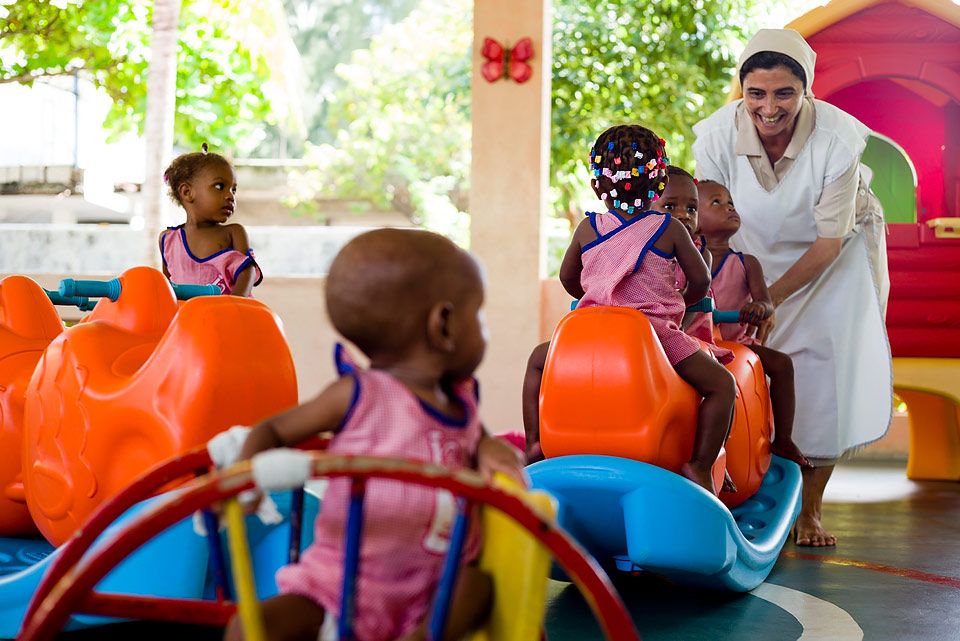 Sister Maria playing with children where she works

“Cité Soleil is a poor area. When you are looking at the people, they don’t want to stay here, but they have to stay because they have nowhere else to go. We have to stay here because if we go, people around here won’t have help. Nobody wants to come here.”

Sister Maria along with the other sisters and workers at the Rosalie Rendu Heath and Nutrition Center are committed to changing this grim reality. The center offers vaccination services for young children, HIV treatment, and classes for new and expecting mothers on nutrition and family health. Since 2000, CMMB has offered financial and staff support to the Center in a number of capacities.

In the past, the nutrition program that Sister Maria manages has been put on hold due to an increase in theft. In the evenings, the sisters pray for peace knowing there is a great likelihood they’ll awake to a robbery in the middle of the night, or notice something missing in the morning.

Despite the difficulties, change is happening – slowly but surely, Sister Maria and her colleagues see the effects of their calling. Many years ago when Sister Maria was new to the center, she says it was a fight to get mothers from the community to vaccinate their children. There was little education on the importance of taking newborns to a health clinic soon after birth. In response, the Center began sending out groups of medical workers to make home visits and invite people to visit the clinic. 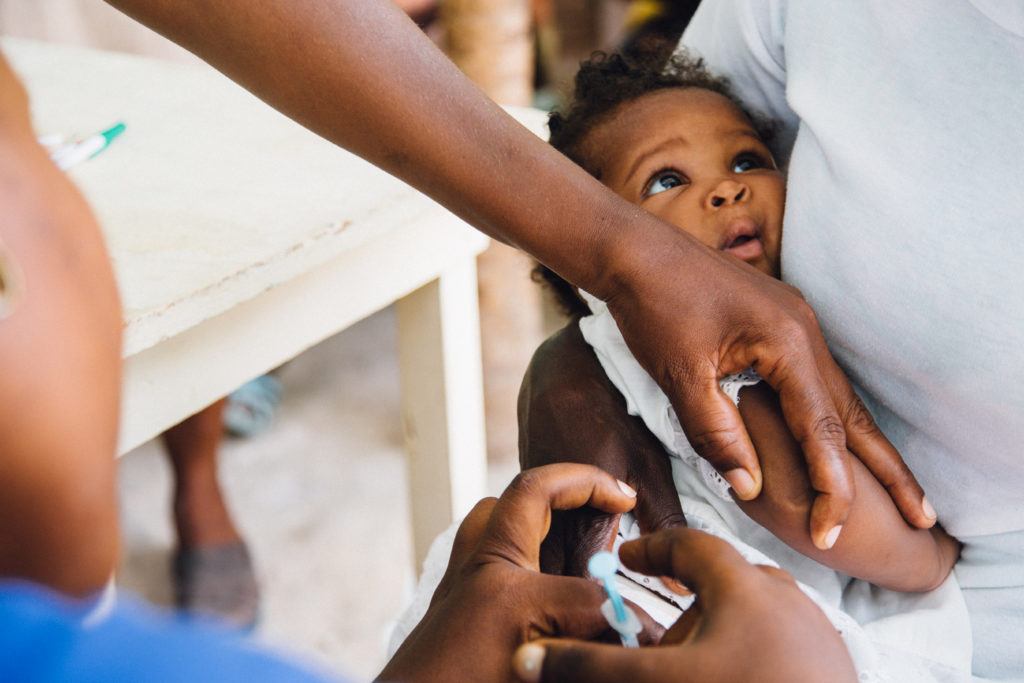 A child receiving a vaccination in CMMB facility in Haiti

Before, mothers didn’t care about vaccinations and weighing their children, but now, if you come visit the clinic at the end of the month, this place is full of mothers and children getting vaccinations, taking their weight, and waiting to see a doctor.

Sister Maria remains content to wait expectantly for change – no matter how long it may take for this to happen. She reminds us that her purpose is not contingent upon the outcome of her work – but on the reality that there is always someone in the world to care for. “Change is there – you may not see it, but it’s there,’ she says. “I’m not working to work. I am working because I love what I do.”

We remain confident in the successes and stories of hope that will come from the Rosalie Rendu Heath and Nutrition Center, but we’re thankful for Sister Maria’s reminder that helping those in need is less about pleasing people and more about trusting that change will take place.

“When you do a thing with your heart, only good can come.”