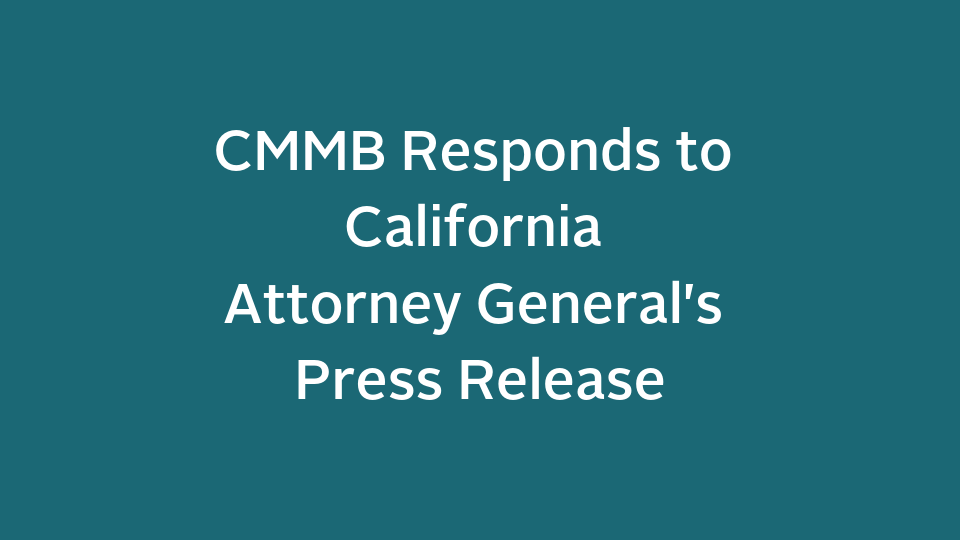 At CMMB we hold our work to the highest standards and are diligent in our transparency and professionalism, adhering to and abiding by acknowledged and accepted industry reporting and generally accepted accounting principles (GAAP).

For over 100 years, we have fulfilled our mission to serve vulnerable women, children and communities in need with access to healthcare services. In addition to delivering on our mission, our integrity and reputation have been our chief and primary assets.

On Friday September 20th, the California Attorney General’s (CAG’s) office posted a press release on their website announcing that the CAG had obtained a cease and desist order and fines against three charities. CMMB was one of the non-profit organizations named in the release.

The CAG’s release includes statements about our accounting and medical donation valuations that are wholly inaccurate and knowingly false. As the CAG is aware, a California administrative law judge found in our favor, specifically concluding that CMMB follows all proper accounting and valuation methodology in line with GAAP.

CMMB uses a nationally recognized accounting firm to audit our records each year to ensure GAAP compliance. The IRS also periodically audits our tax returns and has found them to be fully compliant with IRS regulations.

The CAG fines mentioned in the release were based on language within solicitations the CAG felt were not properly presented, this despite the fact that the language used was based on the approved accounting and valuation methodology upheld in the CAG’s decision. It is important to note that neither CMMB nor the California Attorney General’s office has ever received a complaint from a donor regarding these solicitations.

CMMB stands firm in our position that our audited financial statements are fully compliant with GAAP and IRS regulations. CMMB is appealing the decision that the solicitation language could potentially be misleading. The CAG’s office has agreed to stay any fines until our appeal has been heard and decided.

Though we disagree with the CAG’s position, we have operated in good faith and immediately agreed to follow all of the CAGs recommendations since the matter was first raised by the CAG’s office.

As of the date of this posting, the CAG’s office has not acknowledged or addressed the misstatements in their release.