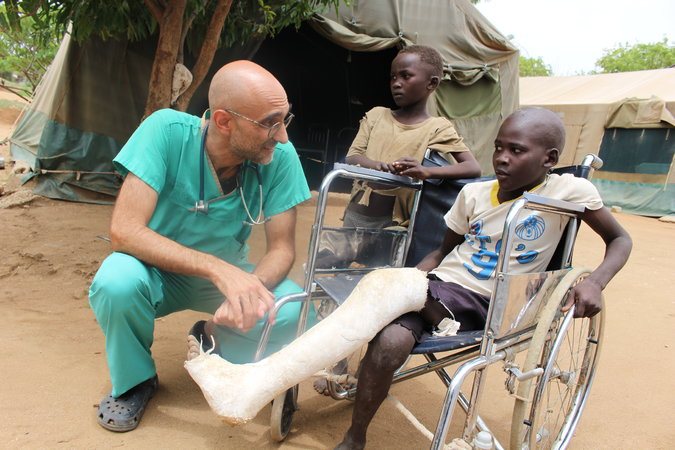 April 24, 2017 – For the second year in a row, Dr. Tom Catena has been announced as one of five finalists for the prestigious Aurora Prize for Awakening Humanity. Already internationally recognized as a dedicated humanitarian for his work at the Mother of Mercy Hospital in the war-torn Nuba Mountains of Sudan, Catena was previously named as one of Time’s 100 Most Influential People and was featured in the film The Heart of Nuba, directed by Ken Carlson.

Despite years of violent conflict, Catena remains in Sudan, saying, “My decision to stay here was a simple one. As the only doctor at the only major hospital in the Nuba Mountains, I could not leave in good conscience. Also, as a lay missionary, I felt it was very important to show the presence of the Church in this time of need—to show that the Church does not abandon her people when a crisis arises.”

He recently wrote to us: “I want to thank CMMB for sponsoring me over the past 17 years. This experience has helped to strengthen my faith, as we’ve had many examples of God’s grace working through us.”

CMMB first supported Catena for short-term volunteer missions while he was still a medical resident. These initial commitments to CMMB have turned into more than two decades of volunteer service. Since 2008, Catena has been the only doctor permanently based in Sudan’s Nuba Mountains, serving a population of more than 750,000 people. He treats hundreds of patients every day and is on call 24 hours a day, seven days a week, delivering babies, performing surgeries, and treating injuries resulting from bombings by the Sudanese government.

Through its pharmaceutical donation program and with financial, material, and other logistical support, CMMB supports Catena and the 300-bed Mother of Mercy Hospital and is one of three organizations designated by Catena to receive a total of $1 million in humanitarian support if he is named the 2017 laureate.

CMMB president and CEO Bruce Wilkinson said, “Dr. Tom Catena sets an example of courage, compassion, commitment, and faith that continues to inspire people around the world. Through our volunteer program, CMMB is privileged to be able to serve women and men like Dr. Catena who, in turn, selflessly serve the world.”

“Dr. Tom,” as he is known in Sudan, was born in Amsterdam, New York, and attended Brown University in Providence, Rhode Island, graduating in 1986 and distinguishing himself in football; he was named an Associated Press honorable mention All-American football player and a first-team All-Ivy pick as a defensive lineman. He earned his medical degree in 1993 on a U.S. Navy scholarship at Duke University and began his missionary career during his fourth year there with a stay in Kenya. He returned to his missionary life after a residency in family medicine at Union Hospital in Terre Haute, Indiana.

The Aurora Prize for Awakening Humanity was founded in 2015 on behalf of the survivors of the Armenian Genocide. The Aurora Humanitarian Initiative seeks to empower modern-day saviors to offer life and hope to those in urgent need of humanitarian aid and to continue the cycle of giving internationally.

The winner of the Aurora Prize will be announced on May 28, 2017, in Yerevan, Armenia.

Catholic Medical Mission Board, universally known as CMMB, is an international NGO providing long-term, community-based medical and development aid to communities affected by poverty and unequal access to healthcare. For over a century, CMMB has worked to strengthen and support communities through healthcare programs and initiatives, the deployment of medicines and medical supplies, and the placement of volunteers. Now in its second century and as part of its new global strategic platform, CMMB is focusing on health issues facing women, children, and adolescents. CMMB’s emergency relief program quickly responds to dangerous situations, from conflict to natural disasters, by supporting affected communities with donated medicines, volunteers, and medical personnel, and by meeting emergency medical needs at partner health facilities. CMMB works in collaboration with hundreds of local and international partners to deliver sustainable health services in targeted communities within Africa, Latin America, and the Caribbean. To learn more, visit cmmb.org.

More information about Dr. Catena can be found here: http://cmmb.wpengine.com/volunteer-tom-catena