I Am Not Enough: A Mother’s Reflection in South Sudan 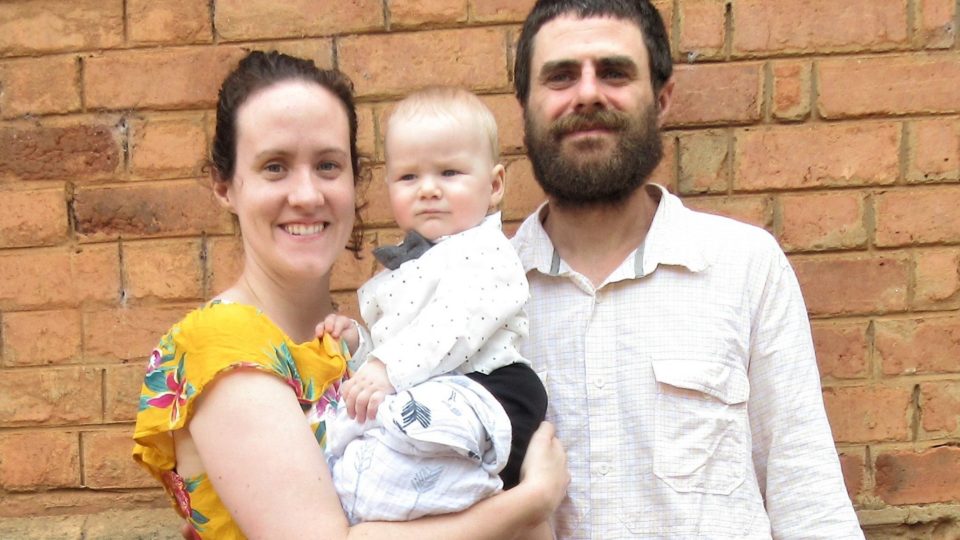 Sarah Rubino is a nurse midwife who served with us in Nzara, South Sudan two years ago. After welcoming her son Max into the world, she returned to Nzara once again—this time as a nurse midwife and a mother. Below she reflects on the challenges of motherhood in South Sudan and her journey to finding joy in even the smallest actions.

When my husband and I first arrived in Nzara two years ago, I had just received my license to practice as a nurse-midwife. I had no prior training in labor and delivery before I went back to school to get my masters in nursing and only had several years’ experience as an orthopedic/neurological/surgical nurse. I quickly learned that no matter how unqualified I felt, no matter how little hands-on experience I had, I couldn’t let that be a deterrent to working and serving where I was needed most. 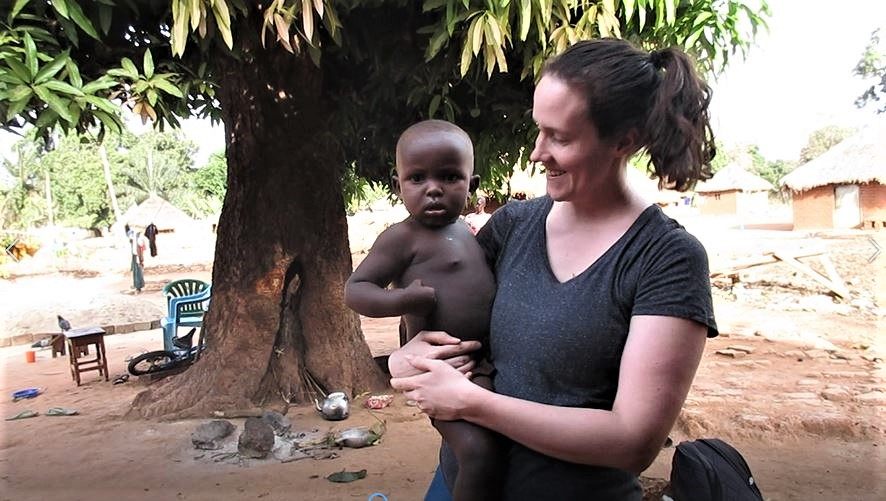 Sarah with the first child she helped deliver in Nzara, two years old.

The Burden of Being Present

While working in US hospitals, I did help save peoples’ lives. But I had the comfort of feeling replaceable. Had I not been in the hospital saving that person’s life, they still would have survived because some other nurse or doctor would have been there to save them. In Nzara, South Sudan, nurses, doctors, and clinical officers are spread so thin that this is not the case.

Many times in Nzara, if I was not there during a difficult delivery of a newborn who wouldn’t breathe, or assisting in monitoring a premature baby, those infants would die because I was not there. Even though I was familiar with volunteering and serving in developing countries, nothing could prepare me for that degree of scarcity in healthcare. It’s heartbreaking to not get there in time to save an infant’s life. I had to come to terms with the burden of being present to save children’s lives while also taking the time to care for myself.

When my husband and I decided to return to Nzara with our 7-month-old son Max, I was aware that the struggle to find a healthy balance would be even more difficult. Not only would I be caring for myself and working as a nurse-midwife; I would be doing this as a mother. 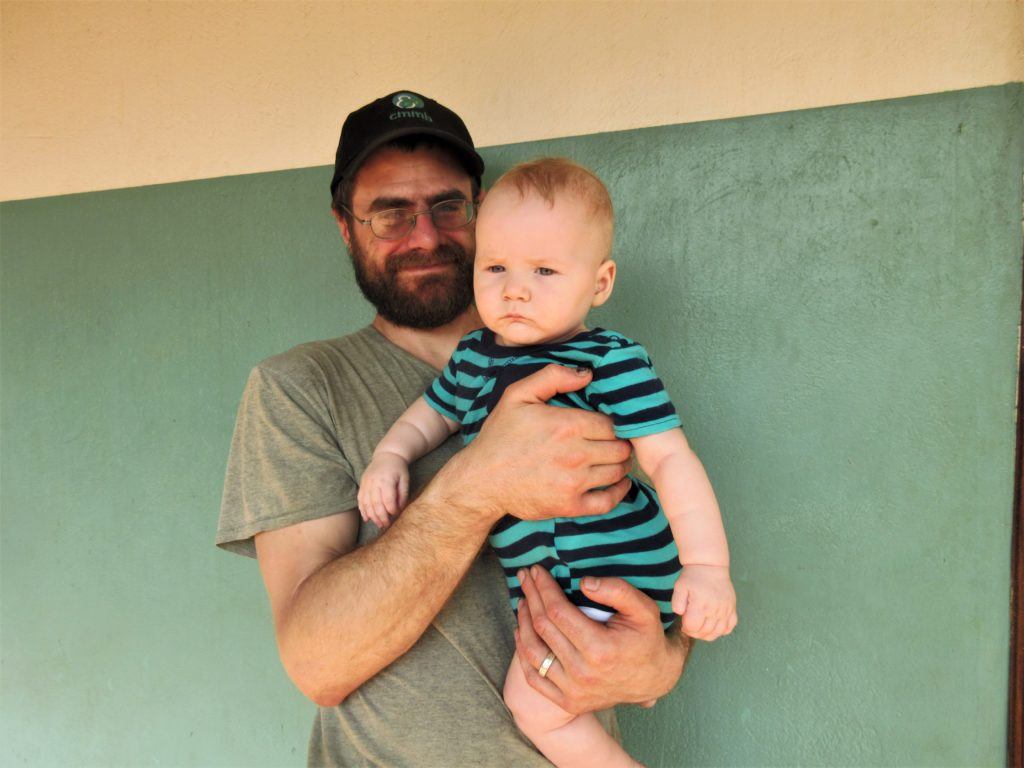 Martin and Max in front of the hospital

In many ways returning to South Sudan felt like returning home. Even though it had been a year since I left Nzara, it was as if I never left.

To Be a Mother in South Sudan

After some days adjusting as a western mother living in South Sudan, I began to realize how much joy and love can be put into the day’s most simple tasks.

I appreciate now more than ever how the women in Nzara make the arduous work of motherhood look effortless. Women would gather water from the bore holes in the village, hand wash clothes and soiled cloth diapers, breastfeed their infants, go to the market to buy whatever food they could for the day’s meals, and then come home to cook lunch and dinner over a fire stoked by the wood they previously gathered. 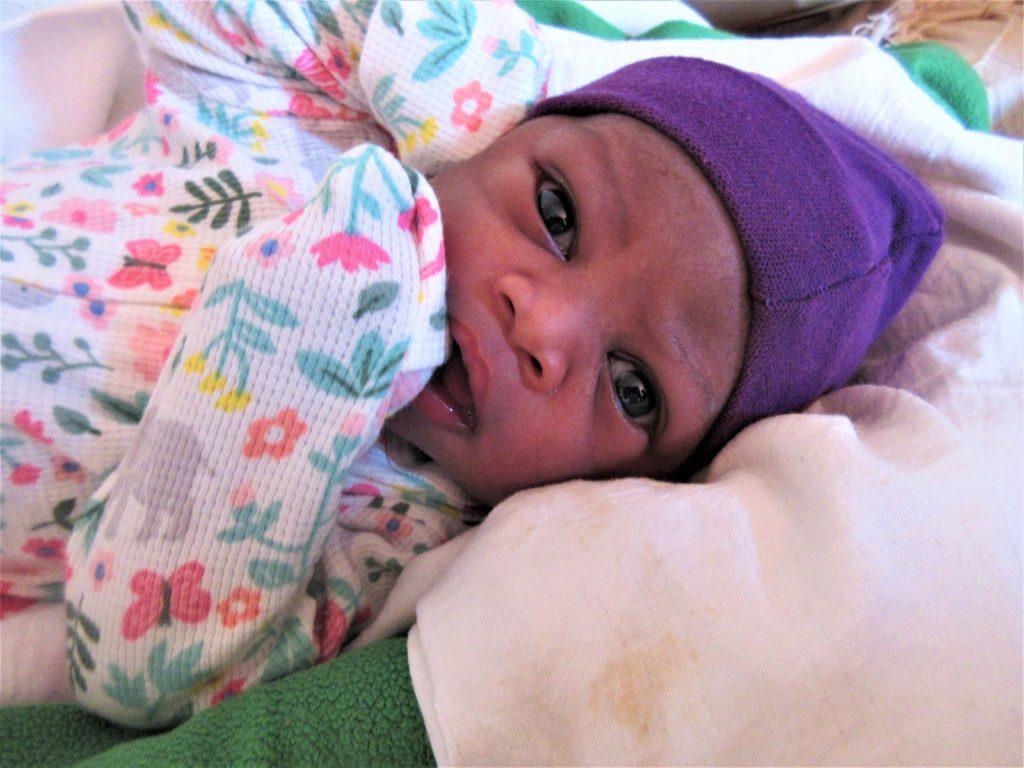 Day in and day out. No days off.  What other option is there? To be a mother in Nzara is more than a full-time job. It is the constant day-to-day struggle to keep you and your children alive. So, like many things, I learned how to raise an infant in South Sudan from the very mothers whose babies I helped deliver. 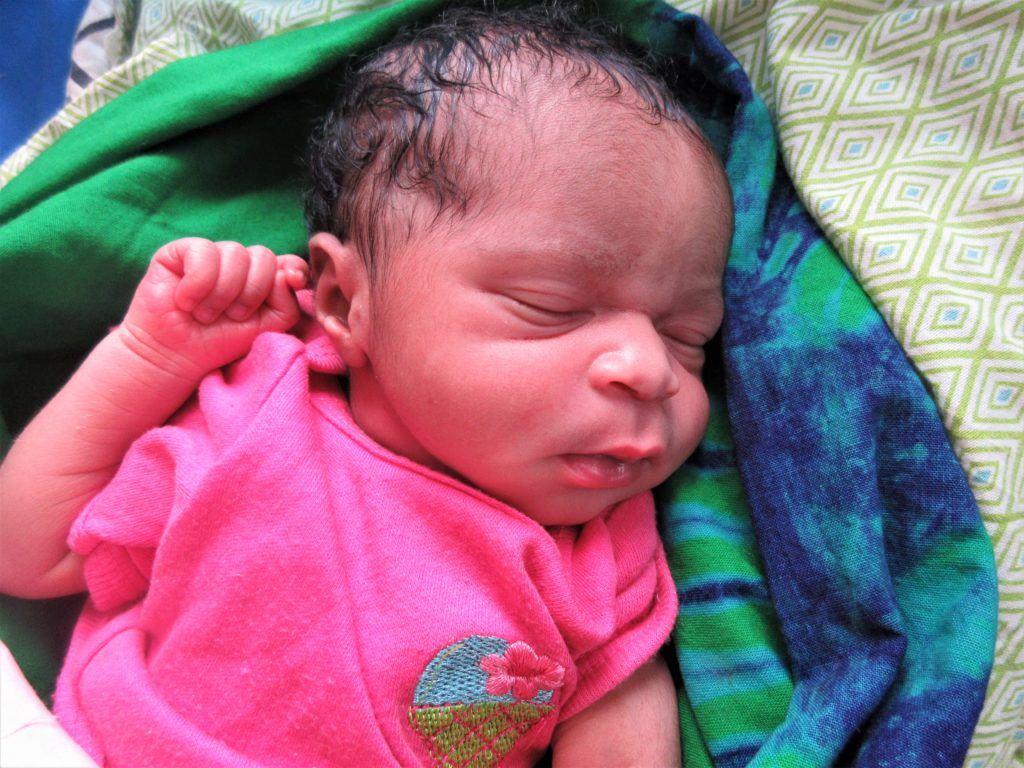 I was lucky to have running water in our bathroom and the money to afford nutritious food.  Because Nzara is so remote, obtaining disposable diapers would have been difficult (let alone finding a place to dispose of them), so cloth diapering for Max was important. I slowly learned how to hand wash Max’s diapers daily, while Martin mastered the art of cooking on a fire for our meals.

Together we purified drinking water as well as the water for Max to safely bathe in. Every evening at 7 p.m. we would put Max under the mosquito net in our bed until 8 a.m. the next morning to protect him from getting malaria or other mosquito borne diseases. The change from living in the United States to living in Nzara meant accepting that five to six hours would be spent each day purely on basic tasks needed to keep ourselves and Max healthy. And doing it all over again tomorrow. 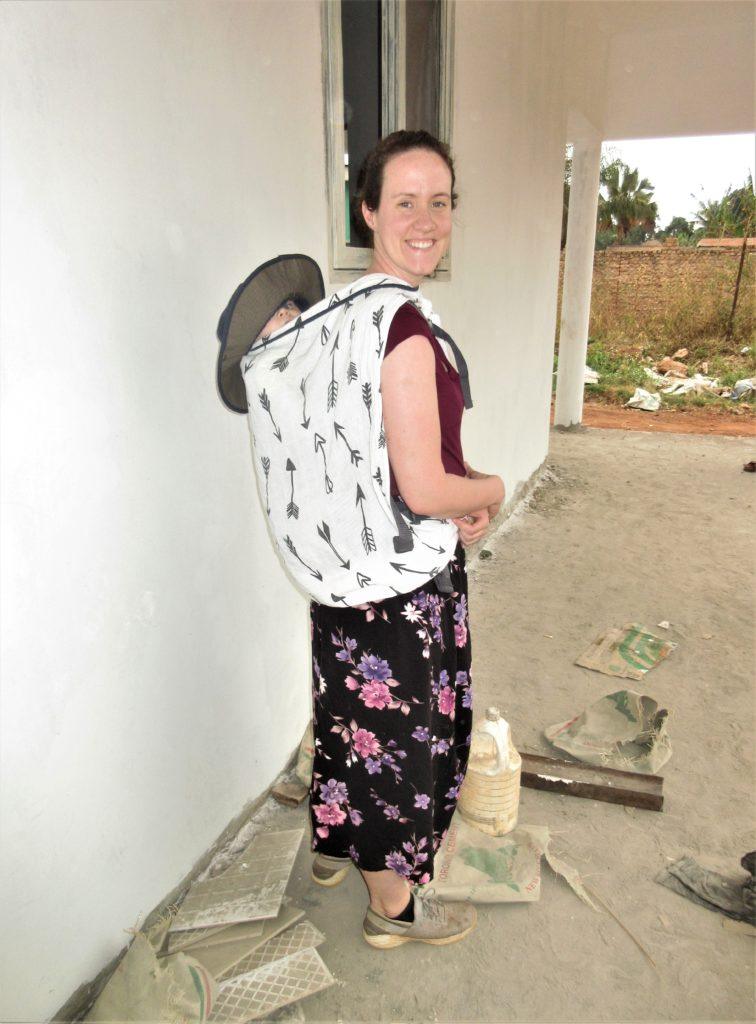 Max and Sarah outside the new blood bank. “Max is tied to my back in a similar way most women in Nzara carry their children. I found this to be the best way to carry him around.”

As a nurse-midwife working with breastfeeding mothers, I knew how important it was for a mother to get adequate rest, nutritious food, and plenty of clean water in order to produce enough milk for her baby. Max’s main source of food was through breastfeeding, which made taking care of myself vital so that the amount of milk I produced would not diminish.

The mothers here often do not have access even to these bare necessities, no matter how hard they work for them. In the face of this scarcity, they give what they can, whatever they have, even if it will never be enough. For those most victimized physically and psychologically by wars, violence, and famines, what they have left to give can be very small indeed. 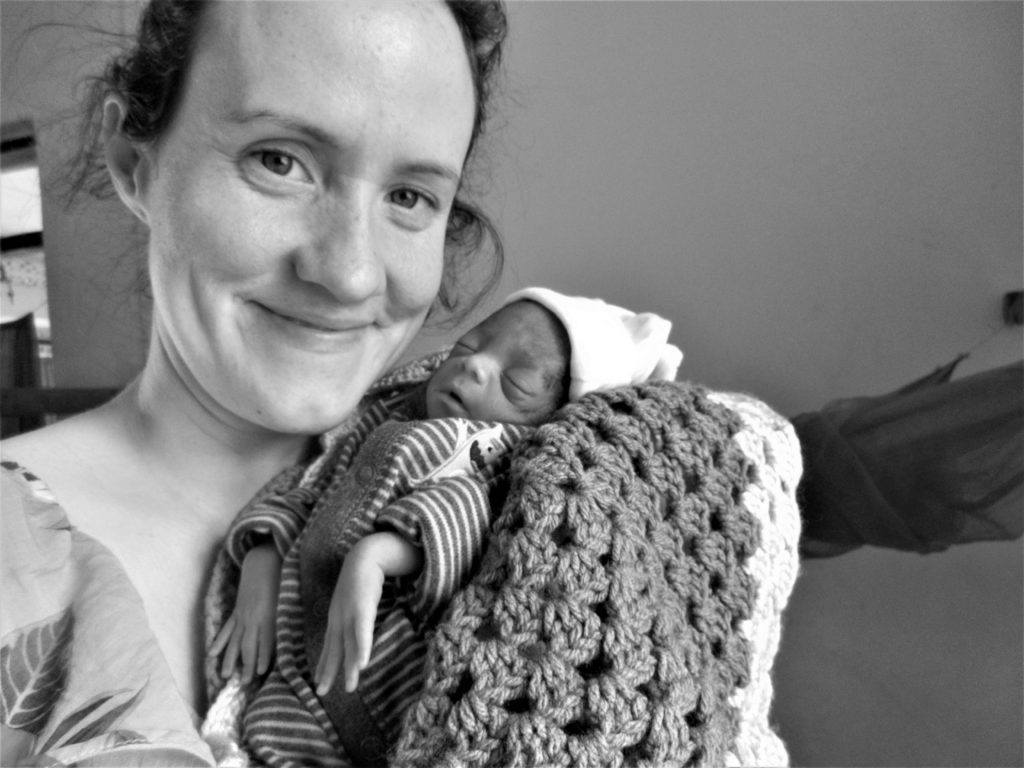 Doing What You Can with What You Have

One day, a mother came in with her sickly 11-month-old son. He was so malnourished that he looked like a skeleton child, sagging skin hanging off of a body that weighed as little as a newborn baby.  He was covered in his own diarrhea, his sunken eyes gazed blankly, helplessly. His mother was so broken by the trauma of unspeakable atrocities that she couldn’t take care of herself let alone love and care for her son. Terror, repeated rape, hopelessness had all but torn away her very humanity from her body.

Normally children his age would shy away from me or even cry and try to run away from my foreign pale skin color. For some reason this boy did not. Whether too weak to care, or that his craving for love and security overcame fear, this little boy let me pick him up and hold him. He grasped my shirt in his shrunken hands and slowly laid his head on my shoulder. Four hours later he died from complications of sepsis.

His mother could not provide him with the care that he needed. She couldn’t provide him with a safe home, clean water, nutritious food, nor even the love and affection all children need. The only thing she could offer him was to painstakingly make her way to St. Therese Hospital in a last-ditch effort to save his life.

Though the little boy ended up dying, her efforts were not in vain. Even her small action of coming to the hospital multiplied into something that provided for her son everything that she could not. The hospital nurses, clinical officers, and I were able to give him the medical care he needed to make him comfortable, nourishment to meet the needs of his malnourished body without overloading his system, and the love he craved.

As a mother living and working in South Sudan, I feel the responsibilities of taking care of my son, myself, newborns, pregnant and laboring mothers, as well as strengthening the capacity of Nzara’s Nurses and Doctors. I am not enough to do it all, and I don’t know how far my small contribution can reach. Like the crushed woman carrying her child to the hospital, like the widow bringing her mite to the temple, we offer the little we have and trust in God’s expansiveness.