Six months completed as a doctor in Nzara, South Sudan without a day off; six months of ward rounds, pleasure and sadness; and my first day off approaching!

An appeal for any small contribution to my charity to enable more people like me to come here. I am reaching another of those moments in my experience here, my first time-off in six months. I have spent over 180 days at St. Theresa Hospital, Nzara, South Sudan, the majority of which running the paediatric ward round. This Friday will be the first day since March that I have not woken up at dawn, walked to work, gathered a set of charts and moved slowly through a ward of sick children. A strange thought.

And, it’s a chance to reflect on what my experience means, what charity means, and consider the bigger picture for a moment.

In six months, the hospital has –

I have personally conducted around 6,000 clinical encounters, 6,000 judgments being made on someone’s health, mostly sick children with malaria, dehydration, pneumonia or malnutrition. I have sadly seen the final breath of more children than I wish to remember now.

But it’s not really a numbers’ game. It’s about stories; relationships, successes, failures. I still think about some of the kids I saved and some of the kids I didn’t. Two year old Oliver with beautiful eyes and bashful smile, whose life I likely saved by forcing in a needle into his shin bone hurriedly to transfuse him with blood. Six month old Victor whose anaemic state passed us by until he appeared in the duty room gasping for breath, to die an hour later.

I think of the bonds I have formed with the staff; the many teaching sessions I have delivered. Witnessing junior staff growing into the roles; watching older staff bring wisdom and experience to my practice.

But then, as I come to the surface for air, I think of something else. Charity; that brought me here, charity that supports me here. The kindness and support of strangers which make this hospital and my time here possible.

Charity has become complicated in the 21st century, scrutinized, and doubted by the ever present social media. We confuse human weakness with a flaw in the idea of charity. No matter how error strewn the practice of charity can appear, I think we can return to simple questions:

From our answer flows everything else, good mostly, bad sometimes unfortunately, but more good than bad we have to hope and believe. The nuns of the Comboni order who run this hospital, who literally give up their entire adult lives in places so far off the map, the beaten track, the western mind. CMMB, the New York charity dedicated for a hundred years to reaching out to such places as Nzara.

I would like to ask for any financial contribution to CMMB you feel you can justify. I work hard on the ground but I do so because it’s rich and rewarding and I believe it makes a little difference. I hope that comes across and that you can offer a little support to the charity that has enabled my placement here.

Two-year-old Oliver spent a week with us after the blood transfusion and went home smiling, with a medical glove in his hand, blown up by me as a parting present. He has a genetic condition called sickle cell disease which means he’ll be back with certainty and faces an uncertain future. 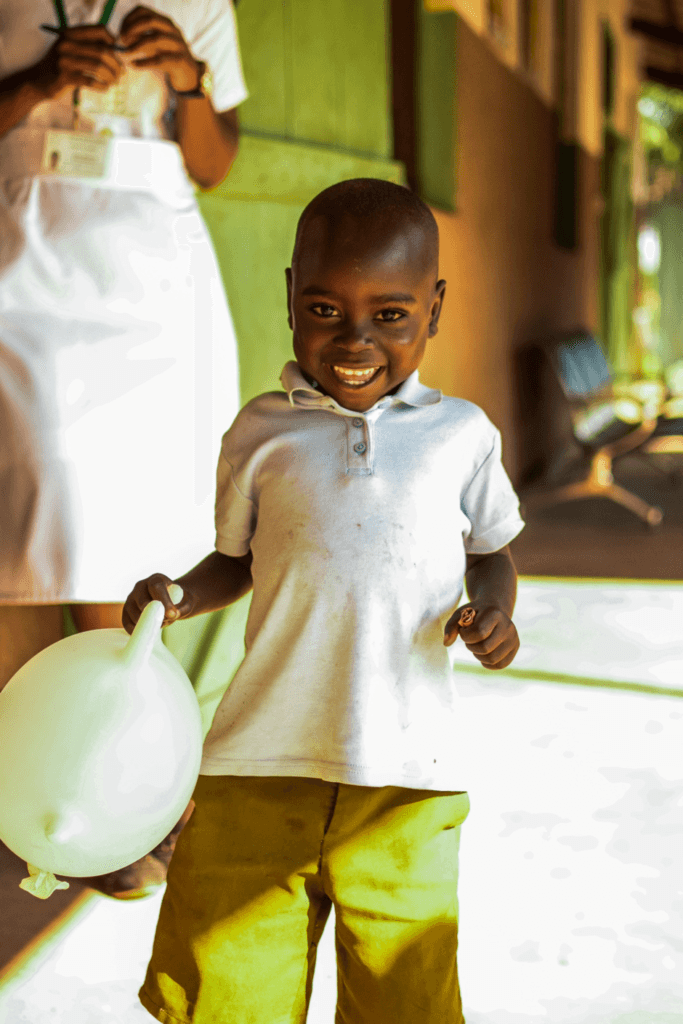 Oliver leaves the hospital with a big smile and blown up hospital glove!

But his mother loves him dearly and the world’s a better place with him in it, for however long. If I didn’t believe that, I would pack up and go home now.

“When God Closes One Door, Another One Opens”
Read More