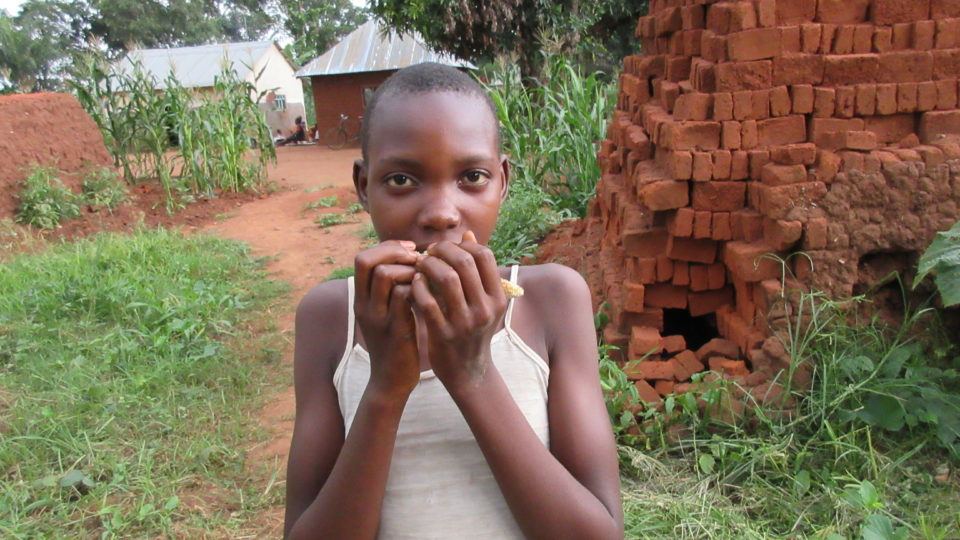 Aurora Fellow and engineer, Martin Rubino is back with updates from June on the progress of the building expansion at St. Theresa Hospital in Nzara, South Sudan. Previously, Martin detailed the progress of the formwork following the completion of the foundation. This week, Martin explains the process of brick laying and in that, shares a lesson about trust, adaptability, and finding God’s beauty.

The standard modular brick in the United States is 4 inches thick, 2 ⅔ inch high, and 8 inches long. These are the “nominal” dimensions, meaning that they already take into account a ⅜ inch gap between bricks for the masons to fill with mortar (so that the brick itself is actually ⅜ inch smaller in every direction, or 3 ⅝” x 2 ¼” x 7 ⅝”).

Of course there are other sizes of bricks available, but their dimensions are controlled just as strictly across the industry. This degree of uniformity and quality control is what allows multi-story buildings with intricate brickwork patterns to be designed with confidence. However, that which is taken for granted elsewhere is not readily available in South Sudan. The quantity of material required for the construction of four large hospital buildings has impelled the contractor to source the bricks from a number of sellers – generally locals who fire bricks in small batches and whose molds never quite match. What this amounts to is that bricks of various sizes and qualities have been delivered to the site.

Coming on the project, I assumed that the bricks would be laid in one of the various traditional patterns, or “bonds,” of interlocking stretchers (bricks placed on their long side) and headers (bricks placed on their short side). These patterns bond the bricks together in a manner that not only is pleasing to the eye, but more importantly creates a structurally sound wall that efficiently distributes the load it bears. However, as I stood surveying offloaded piles of bricks, I had an inkling that the art of masonry in South Sudan would be different from what I was familiar with back home. Within this microcosm of the expansive creativity of God’s handiwork, there were long bricks and short bricks, fat bricks and skinny bricks, dark red bricks and pale tan bricks, and heavy clay bricks and lighter, chalkier bricks.

I stacked a few on top of each other to see how they fit together. As one might now expect, the length of a brick was not precisely twice its width plus ⅜ of an inch; in fact, it was often significantly shorter. I asked the contractor how this issue would be handled and was told that many brick walls here employ the “header bond”, in which bricks are only laid in one direction. The faces of bricks on the exterior of the wall would be flush with one another, creating the appearance of a smooth surface. Only in the unevenness of the interior would one see the effects of an unregulated brick industry, knowledge that would get hidden under plaster or chiseled away at a later date. He continued that the brick buildings scattered throughout town which display more intricate brickwork were either constructed by missionaries who brought their own brick molds with them, or by those who could afford the time and expense of a custom order. Furthermore, the local masons who would be working on the site would be most familiar with the simpler header bond, and mastering a new style of brick work would lead to mistakes and lost time. 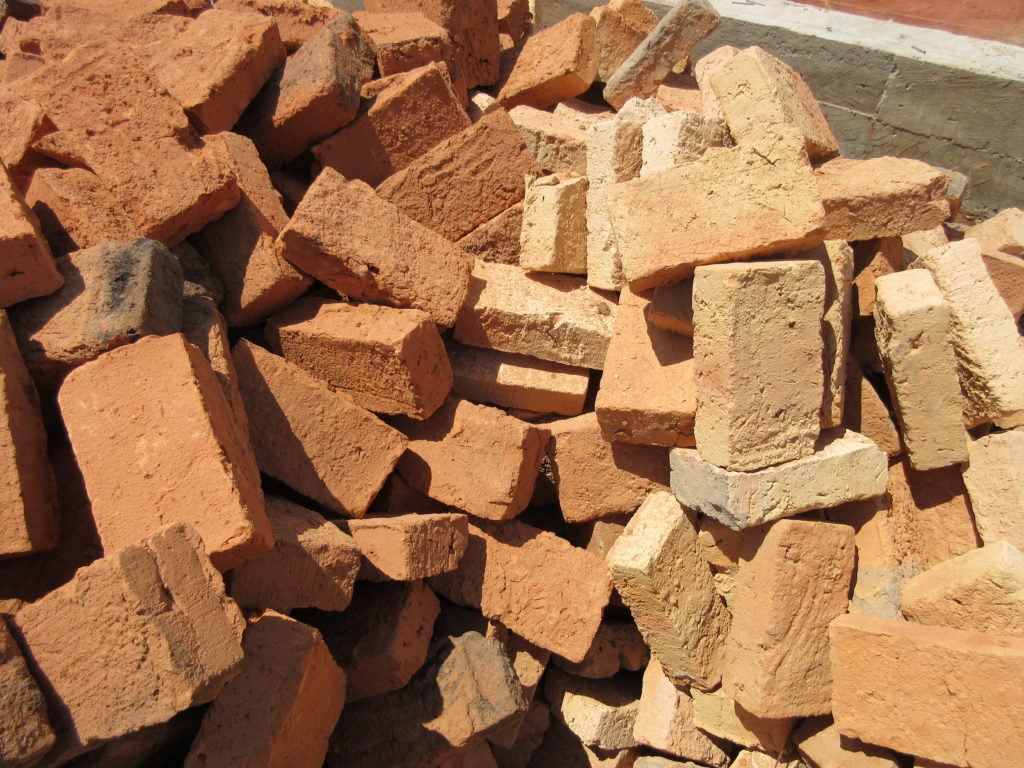 A microcosm of God’s creation reflected in bricks.

Still, the contractor’s plan to use the header bond troubled me. Walls built in this manner would not distribute loads as well as some of the other bonds I had in mind. It would be more difficult to stagger the bricks on top of each other, a key to strong wall. I thought about the generations of patients, doctors and nurses who would be using the facilities for many years to come. I owe it to all of them to ensure the hospital is as well constructed as possible. Just as St. Therese hospital refuses to compromise the quality of care they offer, so too, we cannot allow limited resources to lower construction standards. It is these types of issues that sometimes keep me up at night in an otherwise blissful location, even as the rains come, bringing the cool air that makes for perfect sleeping weather.

I brought up the issue again with the contractor. He acknowledged my concerns, but noted that his building method employs strong reinforced concrete beams on both the bottom and top of the brick wall, as well as steel reinforcement running through every four courses of brick. He assured me that he has built many successful buildings in this manner, including some already standing at St Therese, imploring me to trust his years of experience working in east Africa.

His reasoning made sense. The extra reinforcement he had already incorporated into the building plan should help compensate for some of the shortcomings of the bricks. I had the chance to speak with a mason who worked on previous projects with CMMB. He too had confidence in the header bond. However, it is difficult, even painful to break away from the sense of comfort one derives from the calculated methodology of building codes and industry standards. Though oftentimes wearisome, they provide the assurance that things get built in a manner that has been worked out and refined over many years. In that world bricks are tested and rated. Proper masonry techniques are expounded on in pages of literature. Concrete trucks pour precise mixes. Diagrams, charts, tables, and appendices abound. We cling to these commandments, and for very good reason. Only, maybe good buildings can also exist in other worlds, like the growing hospital in Nzara, South Sudan. 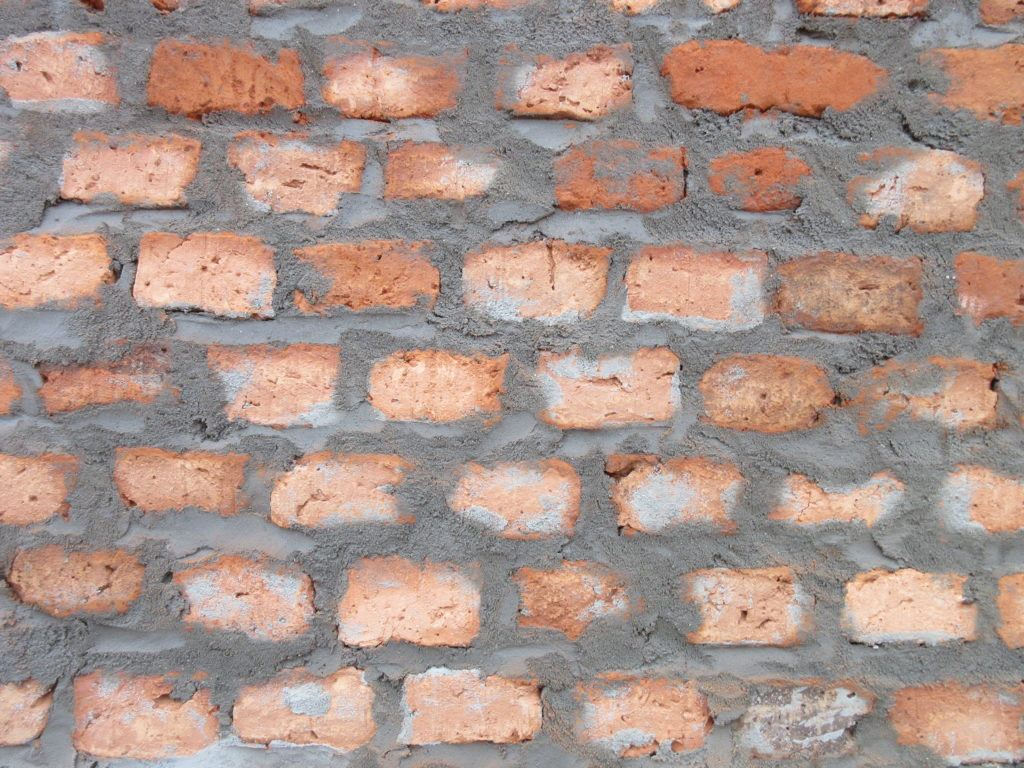 The arrival of rebar, timber, and cement last weekend made it possible for rebar cages to be tied and formwork to be set for the reinforced wall beams at the Operation Theatre and the Surgical Ward. Meanwhile a mechanical compactor was rented to finish compaction at all sites (Maternity Ward, Theatre, and Surgical Ward), with a top-off layer of marrum soil and quarry spoil added and given final compaction. On Friday the concrete mixer was used to begin pouring the wall beams at Operation Theatre and Surgical Ward. Also on Friday brickwork began at the Maternity Ward, setting plumb corners and transferring the level with a water hose pipe.

The brick walls rose rapidly on all three buildings, even as the pouring of the floor slab began. Measurable progress has been made everyday. 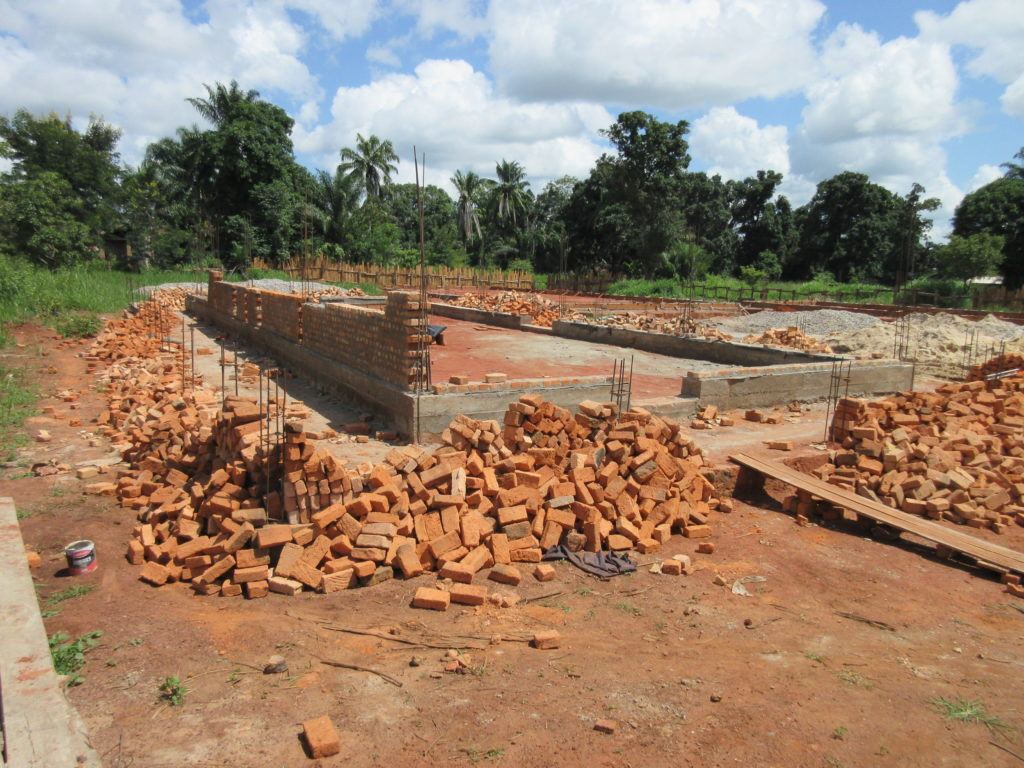 Compaction was completed in preparation for pouring the slab. On Friday, the brickwork began by setting corners and the first course of brick. By Saturday, one wall has already reached a meter in height. 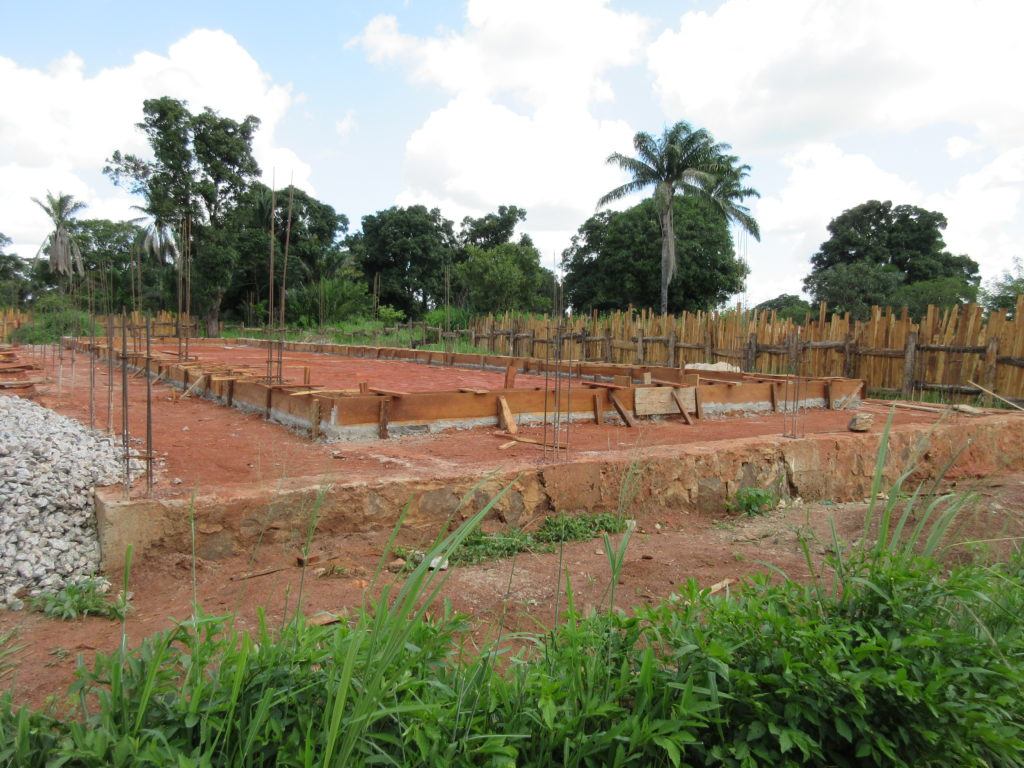 Compaction was completed in preparation for pouring the slab. Rebar cages were tied and formwork was set for the reinforced plinth wall beam. Pouring concrete began on Friday with the aid of the mechanical mixer. 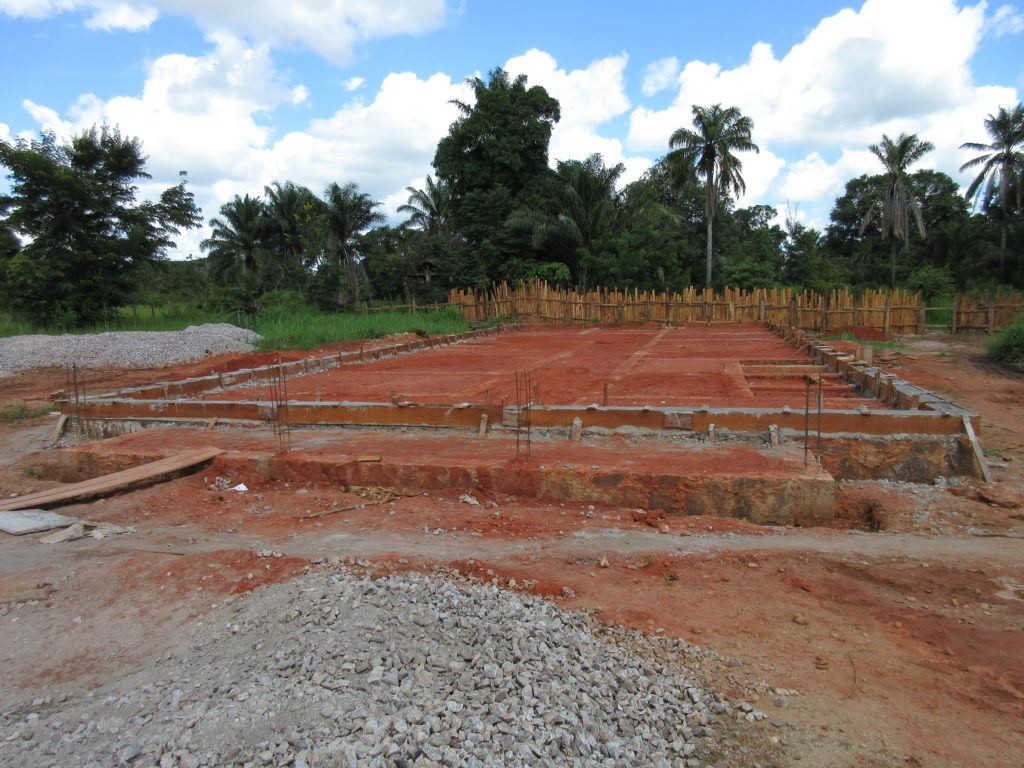 Compaction was completed in preparation for pouring the slab. Rebar cages were tied and formwork was set for the reinforced plinth wall beam. Pouring concrete began on Friday with the aid of the mechanical mixer.

Plumb – Setting plumb corners is important for the structural integrity of a building. Plumb is true to a vertical plane. So, when an object or wall is correctly plumbed, it can fully utilize gravitational forces to distribute heavy loads into the ground and off of the structure.

Quarry Spoil – “Rock waste” that is produced from the process of quarrying and can be used in construction projects. The characteristics vary based on the techniques used in the quarrying.