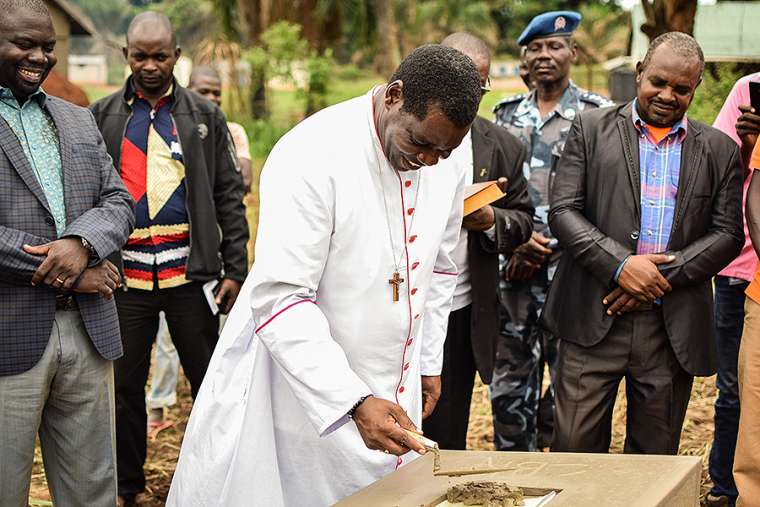 Our very own Rob Wuillamey, director of partnerships, spoke with the Catholic News Agency about the recent groundbreaking in South Sudan. With the help of several partners, CMMB launched the construction of a new surgical unit and blood bank at St. Theresa Hospital in Nzara. The hospital serves over 300,000 people.

This piece by Perry West, was originally posted on May 2, 2018 in the Catholic News Agency (CNA).

Yambio, South Sudan, May 2, 2018 / 03:02 am (CNA/EWTN News).- The Catholic Medical Mission Board is adding a new surgical unit and a blood bank to a hospital in South Sudan, offering better care to a country with one of the highest maternal mortality rates.

“We look to build the capacity of the hospital to make sure they are well equipped and well-staffed and well trained to the meet the needs of pregnant mothers and children coming in for services,” CMMB’s Director of Partnerships, Robert Wuillamey, told CNA.

“One of the initiatives we are undertaking is building and equipping the hospital with an operating theater. Currently, the hospital does not have the capacity to do even simple surgeries in a clean and an efficient way.”

Located in Nzara, fewer than 20 miles northwest of Yambio, St. Theresa Hospital is managed by the Comboni Missionary Sisters and owned by the Diocese of Tombura-Yambio. Specializing in maternal health, the clinic provides most of its medical aid to women and children. It serves some 300,000 people in southwestern South Sudan as well as in the Democratic Republic of the Congo and the Central African Republic.

The hospital will receive not only a surgical operating theater, but a maternity ward as well. Additionally, the hospital will be implanting a blood donation program for patients with malaria and anemia. A psychiatrics program has also been installed to aid the reintegration of child soldiers into civilian life.

In a 2015 estimate, South Sudan had a maternal mortality rate of 789 deaths per 100,000 live births, similar to several other sub-Saharan countries. Maternal mortality rates range from 1,360 in Sierra Leone, to 3 in Finland, Poland, Iceland, and Greece. The rate in the US is 14.

Serious discussions for the new facilities began around a year ago, shortly after the hospital received consistent sources for electricity and clean water. Having broken ground April 7, Wuillamey said the operating theater will hopefully be completed by October.

After the facilities are completed, the clinic will be able to conduct such surgeries as caesarean sections. Currently, the hospital has doctors capable of minor surgeries, but an anesthesiologist and a doctor capable of more complicated surgeries will also be needed.

Last year, the hospital received between 21,000 and 28,000 out patients attendances and 7,000 admissions, but Wuillamey said the number is expected to rise as the new facilities become operational.

He noted that because of its civil war, South Sudan has poorly functioning government services, which will likely encourage people to seek out this private facility.

“The state has a hospital in Yambio, but due to the conflict and the poor resourcing by the government, the hospital has really reached a near collapsed state. So there are not a lot of functioning services at Yambio,” he said.

South Sudan’s civil war began in December 2013. The war is being fought between forces loyal to the country’s president and those loyal to its former vice president, and is largely drawn along ethnic lines. Peace agreements have been short-lived, with violence quickly resuming.

Wuillamey said South Sudan’s medical and educational systems have been greatly weakened because of the country’s conflicts. He also pointed to communities who live in fear as both rebels and government forces destroy villages and displace communities.

“On a conflict level, the conflict has really created a sense of fear and uncertainty in the communities. It has destabilized communities, in the sense that armed rebels, and even government forces, have come in and closed down entire communities.”

When asked about the safety issues, he agreed that there is a level of concern but said that CMMB has also conducted a risk assessment for this mission and has safeguards in place to minimize that risk.

Regardless of the concerns, Wuillamey said the South Sudanese need health care and solidarity, noting it is the Christian faith which motivates people to accompany these communities.

“When I think about what we are doing with this hospital and with this operating theater, it’s part of a broader context of sharing solidarity with the people and creating a safe and healthy environment in which people can thrive.”

“We appreciate the need for organizations to remain committed to the work that they have undertaken. We, as an organization, go into risky situations, knowing that is where the need is greatest, where stability is critical to future of these countries, and these communities. Our faith drives us to walk that path with the people of South Sudan and the Western Equatoria State.”

Learn more about our work