Mother Teresa and CMMB: Partners in the Delivery of Medicine

CMMB (Catholic Medical Mission Board) enjoyed a special relationship with Mother Teresa of Calcutta. In the late 1970s, CMMB started sending approximately $5,000 worth of medicine to Mother Teresa and her mission in Calcutta to help with patients she served who suffered from leprosy.

At our distribution center in Long Island City, Queens, one of our staff members wrote:

“Generally, Mother’s appearances are totally unexpected. The receptionist will inform us that Mother Teresa is at the front door requesting a few minutes of our time. That sets the office staff into great excitement because Mother, though her visit is always a short one, always has time to visit all of the staff and express her thanks for their share in her shipments.”

We remember Mother Teresa for seeing beauty in every human being and for choosing to “serve the poorest of the poor and to live among them.” We strive to work in solidarity with her mission, and seek to serve the most vulnerable women and children around the world, because they still remain marginalized and disproportionately affected by poor health and poverty. Our latest global campaign, Join Hands, was launched with this principle in mind. 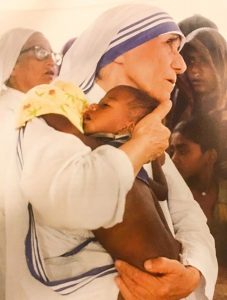 From Agnes to Mother Teresa to Saint Teresa of Calcutta

Albanian by heritage, the future Saint Teresa was born on August 26, 1910 in Skopje, Macedonia, then a part of the Ottoman Empire. Her father died when she was eight, and her mother opened an embroidery and cloth business to support her family.

Always involved in her local parish, Anjezë (or Agnes) Bojaxhiu left home in 1928 for the Loreto Convent in Ireland, where she received the name of Teresa, after St. Therese of Lisieux, patron saint of missionaries. She took her first religious vows in 1929 and her solemn vows in 1937 in Calcutta. She had what she described as “the call within the call” when traveling from Calcutta to Darjeeling and began her missionary work living with the poor in 1948, adopting Indian citizenship and receiving medical training.

“Spread love everywhere you go. Let no one ever come to you without leaving happier.” – Blessed Mother Teresa of Calcutta

In 1985, President Ronald Reagan presented the Presidential Medal of Freedom to Mother Teresa. In his speech, he told the Blessed Teresa, “Your great work and your life have inspired so many Americans to become personally involved, themselves, in helping the poor. So many men and women in every area of life, in government and the private sector, have been led by the light of your love, and they have given greatly of themselves. And we thank you for your radiant example.”

In response, Mother Teresa said, “I am most unworthy of this generous gift… But I accept it for the greater glory of God and in the name of the missions of poor people that this gift, in spirit and in love, will penetrate the hearts of the people. For in giving it to me, you are giving it to them, to my hands, with your great love and concern.”

St. Teresa of Calcutta, Patron Saint of the Missionaries of Charity

Mother Teresa founded the Missionaries of Charity in 1950, which by the 2000s was a Catholic congregation of over 4,500 religious sisters in over 100 countries. Members of this religious order are known to adhere to four vows: chastity, poverty, obedience and to give “wholehearted free service to the poorest of the poor.”

“Let us always meet each other with smile, for the smile is the beginning of love.”

During her lifetime, Mother Teresa received a number of awards, including the Nobel Peace Prize in 1979. Famously, in response to the question, “What can we do to promote world peace?” she responded “Go home and love your family.” In her Nobel lecture, she reflected on creating a home for the poor of the world: “I am going to try to make the home for many people that have no home. Because I believe that love begins at home, and if we can create a home for the poor – I think that more and more love will spread. And we will be able through this understanding love to bring peace, be the good news to the poor. The poor in our own family first, in our country and in the world.”

Many inspiring quotes have been attributed to the Blessed Mother Teresa of Calcutta. For someone so close to CMMB’s mission, we have produced a few special items available to you. If you would like to receive a downloadable prayer card featuring the smiling saint with a special prayer on the back, please click here. If you would like to received a downloadable booklet of inspirations quotes by Mother Teresa, click here.

One of her most well-known quotes, “Do It Anyway,” was based on the “paradoxical commandments” in a booklet by Kent Keith and was found written on the wall of her home for children in Calcutta as a prayer:

People are often unreasonable, irrational, and self-centered. Forgive them anyway.

If you are kind, people may accuse you of selfish, ulterior motives. Be kind anyway.

If you are successful, you will win some unfaithful friends and some genuine enemies. Succeed anyway.

What you spend years creating, others could destroy overnight. Create anyway.

If you find serenity and happiness, some may be jealous. Be happy anyway.

The good you do today, will often be forgotten. Do good anyway.

Give the best you have, and it will never be enough. Give your best anyway.

Love is a core value of Catholic Medical Mission Board (CMMB) and we see it reflected in Blessed Mother Teresa’s work. It guides us to show compassion to others in a world that often experiences suffering and to begin loving each other and prayer for one another, starting in our own families and our own next door neighbors. 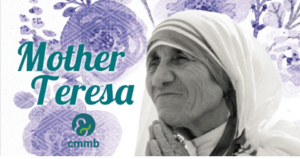 “If we have no peace, it is because we have forgotten that we belong to each other.”