Wheel of Fortune: Students Acting to Build Awareness and Inspire 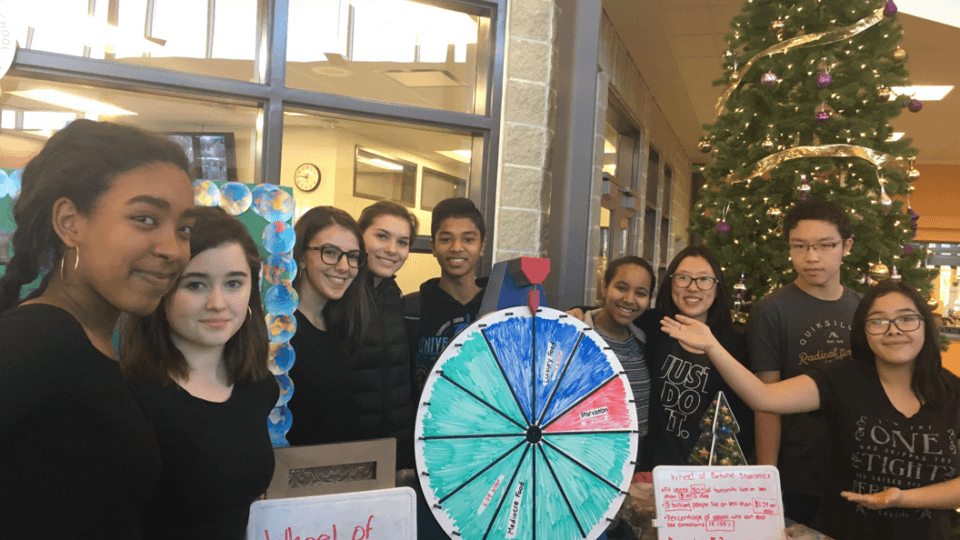 Archbishop MacDonald Catholic High School in Alberta, Canada became a CMMB partner earlier this year. The students of the International Mindedness Club selected us as one of the beneficiaries for their annual basketball marathon event. We’ve been inseparable ever since!

Thanks to this group of compassionate, globally minded students, we are forging a new kind of partnership that we believe will help build awareness and inspire young people to be the change they want to see in the world. Together, we are developing a model that allows us to engage more schools and youth to become part of the solution.

We recently received news from the club about an event they hosted aimed at raising awareness and inspiring their peers to get involved.

As we all know, everything good comes through trial and error. We learn a lot from our successes and our failures.

So was the case for the Wheel of Fortune event.

We started planning for this event in early November. It was happening at the same time that our club was forming our message – our mission statement. We wanted to articulate clearly what the International Mindedness club aims to achieve; and we wanted to do this through action.

And the Wheel of Fortune was born.

This was the first event that we held this year and it was important for us to set the tone for the year.

We began by brainstorming words that came to mind when we thought about our IM club and about our partnership with CMMB. After many discussions and deliberations, we ultimately decided to focus on the concept of privilege. We, the youth at Archbishop Mac Donald, really are such a privileged group of people.

This was definitely a wake up call for all of us.

But what really hit us was when we actually did the research and learned just how privileged we were. Turns out, even through vague calculations, that we are in the top 15 percent of the world.

And that is when we decided we wanted to do something to raise awareness about this fact.

First things first, we needed to be able to attract people’s attention. It is getting harder and harder to grab people’s attention in a world of distraction. That was when one of our club members remembered the roulette wheel at our city’s science center where she just happened to volunteer! They agreed to lend it to us.

Next step, decide what to focus on. There are so many disparities with regards to access in our world. Access to:

After some extensive research, we decided to focus on access to food. Taking all the information we had learned about food access, we then divided the wheel into percentages reflective of this division.  It looked a little something like this: 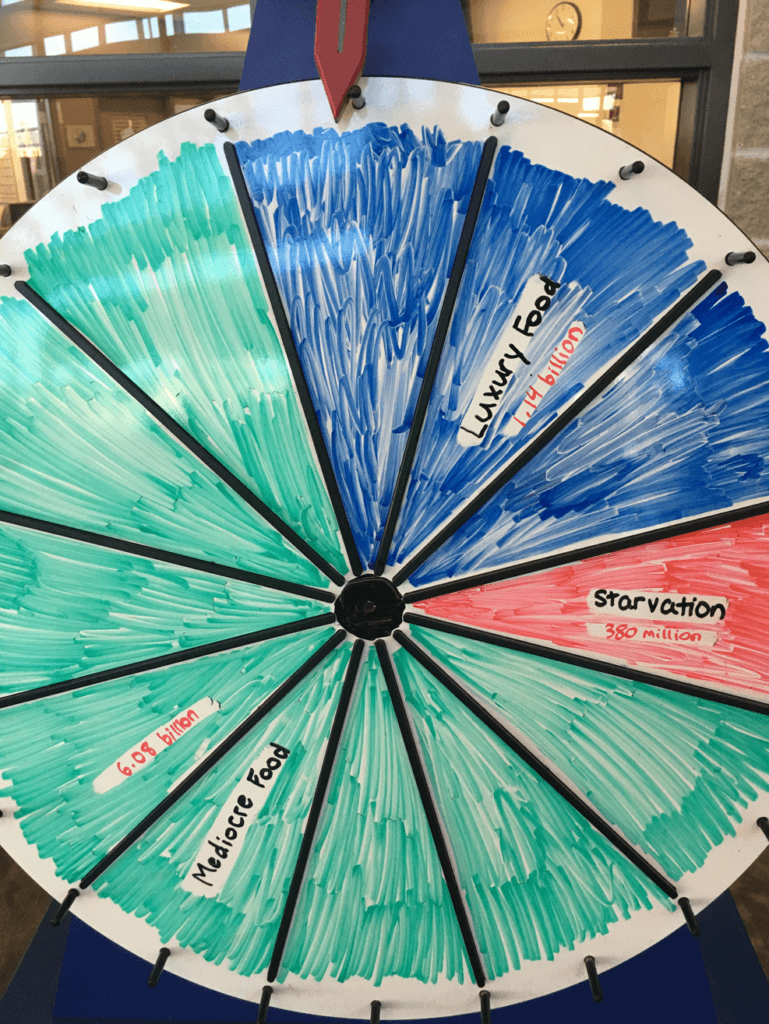 We decided each category:

Each student who took a spin at the wheel was then given a food item that correlated, as realistically as possible, with the category they spun. When someone landed on red, they received nothing. Those who spun and landed on the green received a bun, a slice of bread, or a cup of rice. The people who landed in the blue zone, however, received an invitation to IM’s Christmas party the following Friday, where comparatively ‘luxury type’ food would be served.

Ultimately, our experiment worked! Students paid $2 to spin the wheel, and even though this event was mainly centered on awareness, we raised around $200 in total from only one lunch hour! This gave us the signal that the student body was interested and eager to learn. This helped build momentum in the club and the level of motivation was high! It was great to see that the students at Archbishop MacDonald really cared about issues affecting people other than themselves.

This really is only the beginning. We are in the process of planning larger-scale events for the new year. We are passionate about our established mission and purpose, and we are looking forward to our continued partnership with CMMB!

We are on a journey of learning about what works and what doesn’t, and the importance of staying informed and passionate – and we will definitely keep you updated on our progress.

We are looking for other students and schools interested in joining us as we embark on this new journey.

From Volunteer Dr. Jose Garcia: “You Were There in the Room With Us”
Read More
December 3, 2020