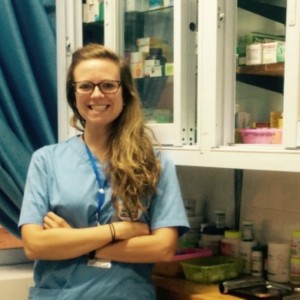 Brittany Jonap is serving as a volunteer in Côtes-de-Fer, Haiti. In this article, Brittany shares her experience of the SIDALE project – a comprehensive HIV/AIDS care and treatment program – and talks about what it was like coming face-to-face with the people CMMB serves.

The first case of AIDS in Haiti was reported in the late 1970s. In 1982, the Centers for Disease Control and Prevention (CDC) listed “Haitian” as among four risk factors for contracting the infection, which resulted in the insolent labeling of HIV/AIDS as the “4-H club.” This stigma dramatically impacted tourism in the country. At its peak in the mid-1990s, approximately 9% of all Haitians living in urban areas had HIV/AIDS. Today, the prevalence of HIV in Haiti indicates that 2.2% of the population is infected. This equates to more than 200,000 people, but it marks tremendous progress from where the country was 20 years ago.

It is sad to read about statistics in the news, but when the statistics become patients standing in front of you it is something much more powerful and heartbreaking.

In Haitian Kreyol, SIDALE is the abbreviation for SID, meaning AIDS, and ALE, meaning “to go”, loosely translating to: “AIDS Go Away.” That is the name of CMMB’s program, a CDC-funded HIV/AIDS care and treatment program in six faith-based hospitals throughout Haiti. Essentially, its mission is to help eradicate HIV. The program provides resource support to medical institutions throughout the country, solving problems and strengthening their HIV prevention and treatment programs.

I traveled with two physicians and a pharmacist named Ralph from the SIDALE team last week to visit two of their partner sites in the northern part of Haiti, Hospital Alma Mater and Hospital Esperance. Both of these institutions have dedicated programs and facilities for treating patients with HIV/AIDS. As part of the site visit, Ralph and I did many things, including observing the HIV pharmacists. A patient would walk in the door and sit across from the pharmacist. The pharmacist would pull up their record, assess compliance, fill their prescriptions, counsel them on administration, and document the dispensing. Each visit probably a maximum of 10 minutes and upon one patient’s departure, another would arrive. And this was non-stop for the full hour that I observed. It was patient after patient after patient.

Of course I’ve known for a long time that HIV/AIDS continues to plague the country. But seeing it firsthand felt different. The constant flow of patients ranging from 5 year-old girls to grandfathers was striking. It is sad to read about statistics in the news, but when the statistics become patients standing in front of you it is something much more powerful and heartbreaking. The impact of these programs felt immense. Each of these patients receives their consultations, drugs and transportation free of charge. I passionately believe that equitable, accessible and affordable medications should be a right for everyone – not a luxury. Knowing that antiretroviral medications are readily available to the people of these communities helps me believe that maybe, just maybe, a world free of HIV/AIDS is possible.

Brittany Jonap is currently volunteering in Côtes-de-Fer, Haiti as a pharmacist. She graduated from the University of Florida College of Pharmacy in 2011 and has since worked as a hospital clinical pharmacist, most recently in an emergency department in Memphis, TN. Within the past year she has traveled extensively and spent several months working at a hospital in Laos. She has been to Haiti multiple times to volunteer with St. Vincent’s School for Handicapped Children and joined the Haiti CMMB team in June.

Inspired by Brittany’s work? Help her reach her fundraising goal or consider volunteering with us.

View All
July 22, 2020
Sending Messages of Love and Support
Read More
May 20, 2020
“When God Closes One Door, Another One Opens”
Read More
December 5, 2019
On International Volunteer Day: A Letter of Thanks to all our Volunteers
Read More
October 30, 2019
Brittany Jonap: Where Is She Now?
Read More
This site uses cookies to offer you a better browsing experience. Read our privacy policy.
ACCEPT