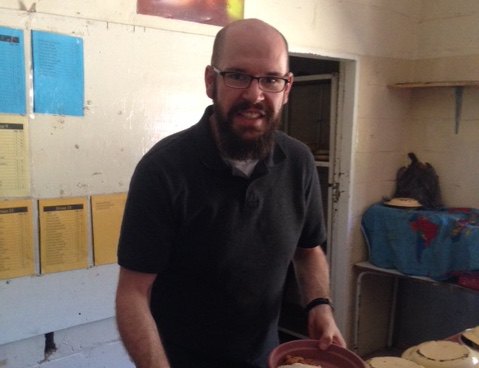 Brian Rockhold is one of our amazing volunteers serving in Mwandi, Zambia as a program and operations support officer. Serving alongside him is his wife Alyson, who is a Physician’s Assistant.

In the piece below, Brian reflects on his first months in Zambia and how learning to foster a child-like faith has allowed him to become a part of his new community.

In the months and weeks leading up to my time of service in Mwandi, I spent much time in prayer asking God for a mindset befitting the work we are called to do with CMMB and for a posture in my soul that would honor Him in my work. I knew I wanted to have a humble, sacrificial attitude and find God in the new people I would meet and in my new surroundings. However, I did not know exactly how to put that into practice.

What does it look like to turn towards God during the learning curve of cultural assimilation and orient my spirit to his work as a guest in a new culture and place? The answer God led me to: adopt a child-like faith.

Having a child-like faith is difficult for me to grasp, and always has been. I am a type-A person and tend to focus on growth. After all, aren’t we supposed to grow (up) in our faith? I tend to favor measurable results, quantifiable metrics, and value progression and development in myself and my work. Considering all my natural tendencies, becoming child-like in anything seems…regressive, counter-productive, or a step backwards.

Luckily, I am in a village full of teachers who lead by example to show me exactly what a child-like faith looks like. When the children in Mwandi run beside me in the street waving, they teach me about the far-reaching Body of Christ. When a young child approaches me at the Orphans and Vulnerable Children (OVC) recreation center and calls me ‘uncle’ before asking for the time, she teaches me about hospitality and vulnerability. When I see children jockeying competitively for a chance to push the wheelchair for a disabled man, they teach me service and compassion. When I see a group of teenage boys amusing themselves for hours with homemade footballs, and playing pool with tip-less cues, they teach me lessons in thanksgiving and simplicity.

But, one of the best examples of child-like faith I can share is a young man named Lewis who I met at the OVC. I volunteer there twice a week to help with the lunch distribution, which forms the foundation of the nutrition program for local at-risk youth. Six days a week, children are served a nutritionally sound lunch and hear a short Bible-based devotional. 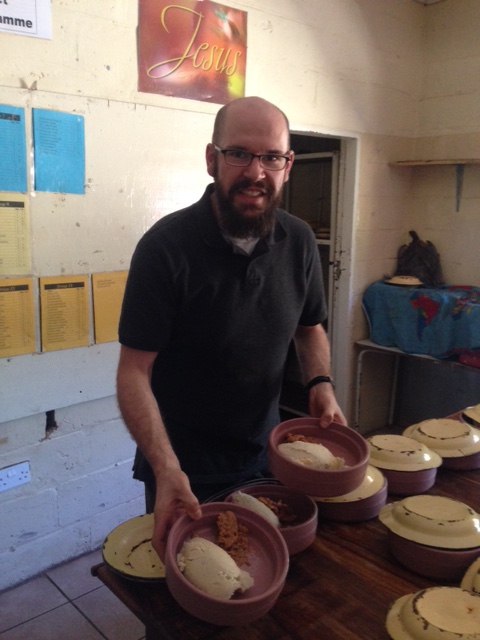 Free lunch is the foundation of the OVC program, which provides services to orphans and vulnerable children within the community.

In addition to the childhood nutrition program, the OVC is a known gathering point for some local youth, especially on Friday nights for their youth group. On my first Friday, Lewis was the first young person to come introduce himself to me, showing off not just his skills in English, but his bravery and hospitality. While I had not met Lewis during my lunchtime volunteering, as he has aged out of the nutrition program, he did not let our unfamiliarity stop him from engaging us.

There are not many children at the OVC who are Lewis’ age. As village children get older, they become more self-conscious of needing the lunches and other services of the center, and the stigma associated it is often a social cost too high for many to pay. But this was not true for Lewis, who took the lead immediately upon seeing me.

Lewis helped introduce me to the other members of the youth group, and put everyone at ease with his sociability and casual attitude. He normalized the fact that an American was in the room, and through his friendliness, courage, and confidence he helped create an atmosphere that allowed for socializing, rather than tense suspicion. He then promptly challenged me to a game of pool and after beating me, informed me that I should not feel bad, because he was the best pool player in the room and winked.

After pool, he asked if I knew how to play chess and if I would like to try my skills against him. If Lewis is the reigning pool champion in the youth group, then he is also a Chess grand-master, as he beat me in five moves, his smile shining brighter than ever.

I was eager to be involved with the children at OVC, hoping I could influence or teach them somehow. Little did I expect to find myself being taught by them. If Lewis can be brave enough to engage another person cross-culturally, vulnerable enough to socialize out of his comfort zone, and kind enough to make a clear outsider feel welcome, then perhaps this is the child-like example I ought to follow.

So many aspects of cross-cultural ministry seem intimidating, and the temptation is to shy away from them or do them half-heartedly. But this is not what Jesus would have his followers do, and he was gracious enough to provide me with encouraging examples and young mentors who can lead by example.

Growing up in America I always heard the adage “It takes a village to raise a child”. Here in Mwandi, it is taking a village full of children to raise a missionary.

Want to read more stories from the field? Click here to sign up for our volunteer newsletter!

On International Volunteer Day: A Letter of Thanks to all our Volunteers
Read More
November 18, 2019

“When Are You Going to Start Giving Back?”
Read More