One Lord, One Faith, One Baptism – Your Weekly Reflection from CMMB 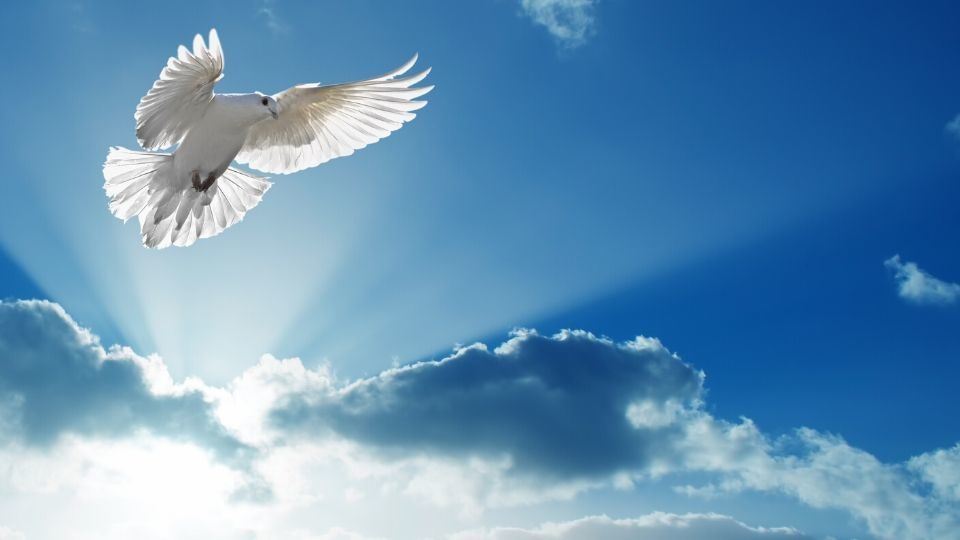 He came up from the water and behold, the heavens were opened, and he saw the Spirit of God descending like a dove.

This Sunday’s Gospel takes us beyond the childhood of Jesus to his baptism by John the Baptist. Jesus chose to be baptized as a gesture to identify with us, to become one of us. By doing so, he set an example for us to follow. Our baptism inaugurates our mission as Christians. Through this sacrament, we receive the grace that calls and helps us love others as Jesus loved. We show this love through actions—by doing for others without expecting anything in return, by comforting the lonely, caring for the sick, giving rest to the weary.

And a voice came from the heavens, saying, “This is my beloved Son.”

Dr. Dianne Jean-Francois is the country director of CMMB Haiti and has been for nearly two decades. Through her tireless drive and dedication to the Haitian people, she embodies the mission that Jesus would want us to carry out.

Dianne’s mother emigrated to St. Louis from Haiti at the age of 26. As a young girl, Dianne returned to Haiti to spend her summers with her grandparents and chose to stay there for high school. She was later trained as a pediatrician and practiced successfully in Port-au-Prince for several years. But for every baby and child who benefited from her care, she knew there were so many more who were lacking. Innocent lives—the future of her homeland—were being lost and wasted. 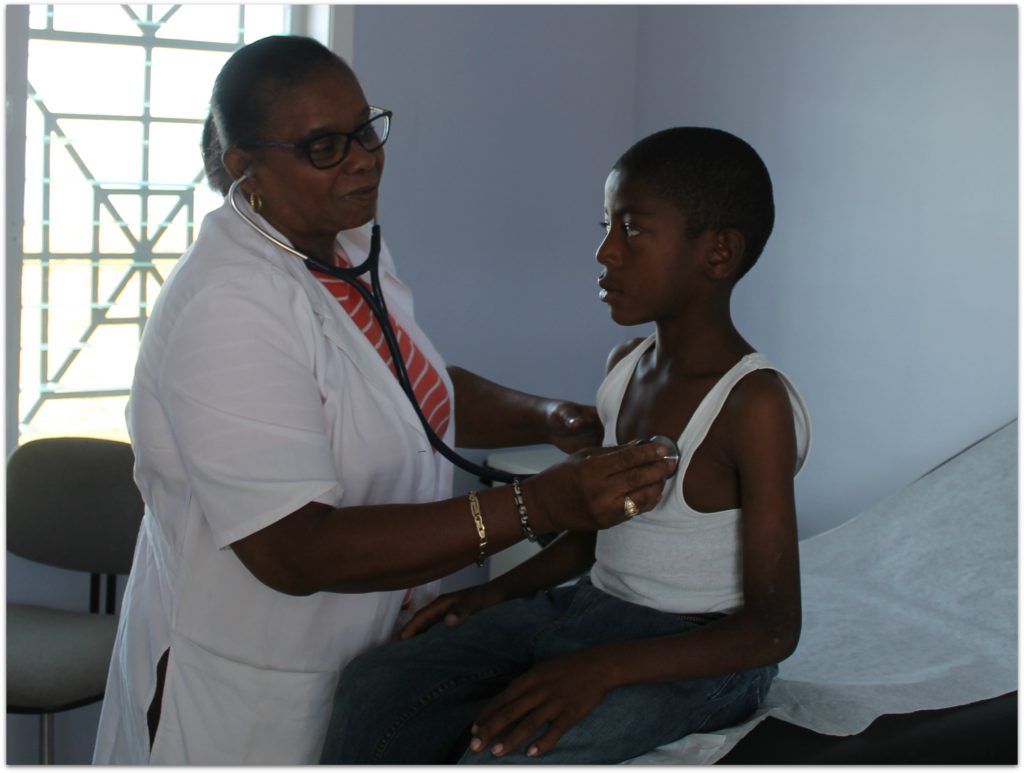 Frustration with this injustice sent her back to the United States for more training, receiving a Master in Public Health degree from Johns Hopkins in Baltimore. Since then she has brought her passion to improve Haiti’s health to CMMB. She has been at the front lines of the crises in her country, both natural disasters and political turmoil, providing emergency aid to those most impacted.

Today marks the 10th anniversary of the 7.0 magnitude earthquake that devastated Haiti in 2010. Haiti is the first country where CMMB served over 100 years ago. It occupies a very special place in the hearts of all CMMB employees. Within hours of the massive quake, Dr. Dianne and her staff sprang into action to provide aid.

The earthquake severely damaged vital infrastructure throughout the country.

The day after the quake, we packaged all medicines available at the CMMB office with the help of partners and took them to L’Hôpital La Paix, a public hospital. CMMB was the first organization to support this hospital after the earthquake and we continued to do the same where there was an identified need before international support could arrive. 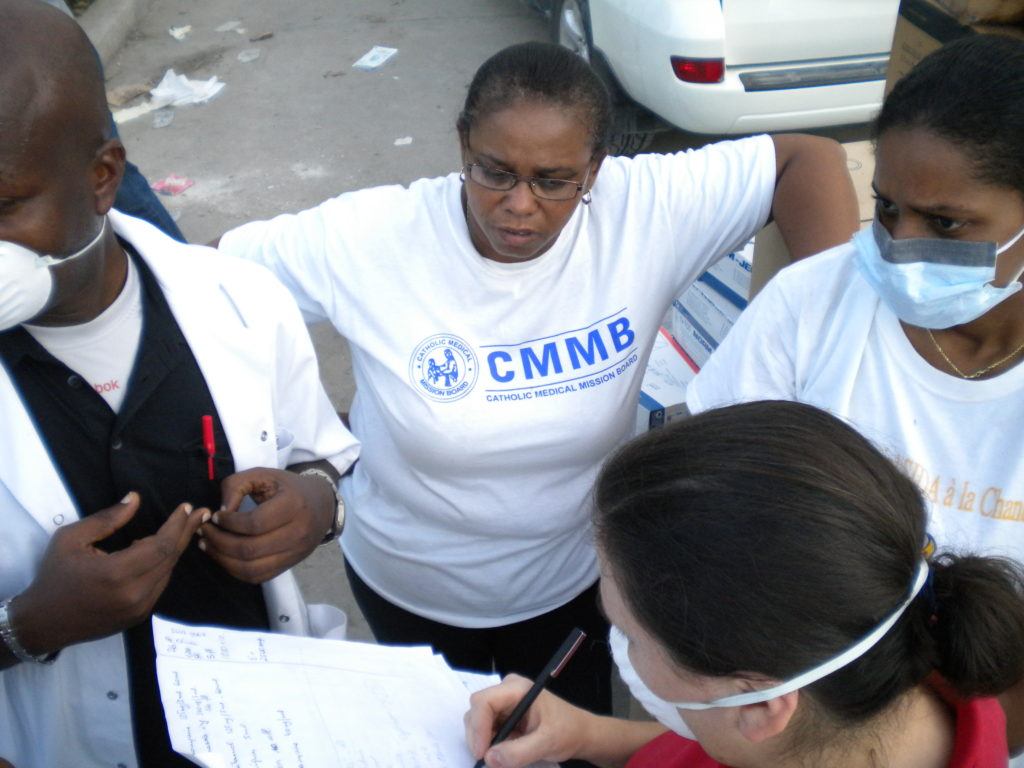 Dr. Dianne and her staff in action during the 2010 earthquake in Haiti.

Every day Dr. Dianne fights to advance the health and well being of the people of Haiti. She networks to find government grants and private funding for needed projects toward the health of mothers and babies. She demands excellence of her staff, as she does of herself, and her programs win awards. (CMMB Haiti’s SIDALE program has repeatedly won awards for retention and care quality with a rating agency.)

She was also the driving force behind the construction of the Bishop Joseph M. Sullivan Center for Health.

After the 2010 earthquake, she saw the devastation at remote, neglected Côtes-de-Fer and the lack of accessible health facilities, so she advanced the idea that the area needed a hospital and then went into overdrive to make it happen. Her tenacious, tireless advocacy and determination engendered a movement; many, many partners contributed to her vision and made it a reality. At the dedication in 2017, the more than 500 community members and dignitaries in attendance gave her a standing ovation, a show of respect and honor. To her, even more satisfying was that within two months of the hospital’s opening, nearly 1,000 people had been seen. Healthcare of such quality has given a high level of dignity to the people of Côtes-de-Fer.

We must live through our sorrows but at the same time be able to go further and stand up for those who still need it.

Let us celebrate the fact that through his baptism Jesus is one with us and that he invites us, through our own baptism, to share in his ministry. May we always be faithful to him, and care and love others as he loves us.