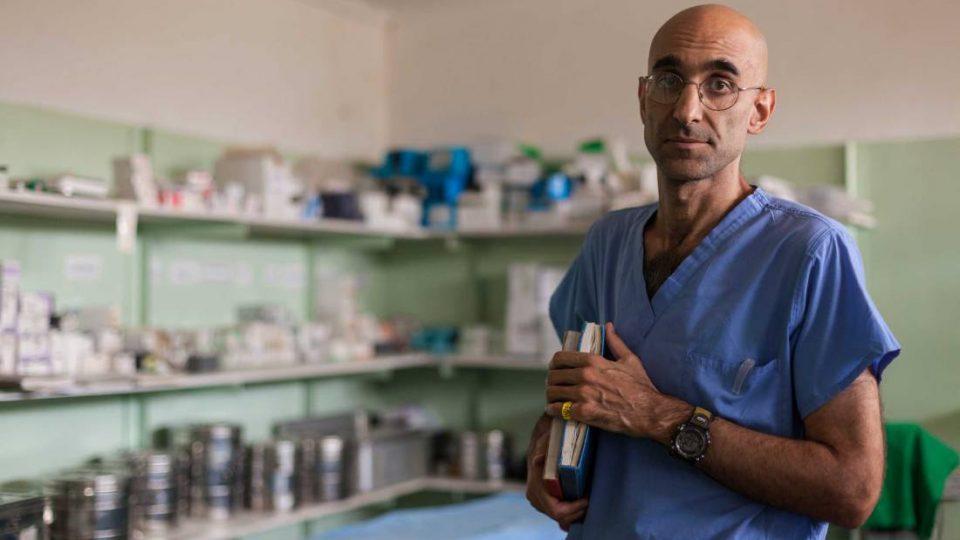 Read about the five finalists for the 2017 Aurora Prize

Dr. Tom Catena is the only doctor serving 750,000 people in an isolated war zone.

At a hospital located deep in the Nuba Mountains of Sudan, Dr. Tom lives and works in a dangerous region under rebel control. Civilians struggle to survive. Ground fighting, aerial bombardment, and starvation warfare make suffering and death an inescapable part of life. But each day, for the patients and staff at the Mother of Mercy Hospital, life goes on. 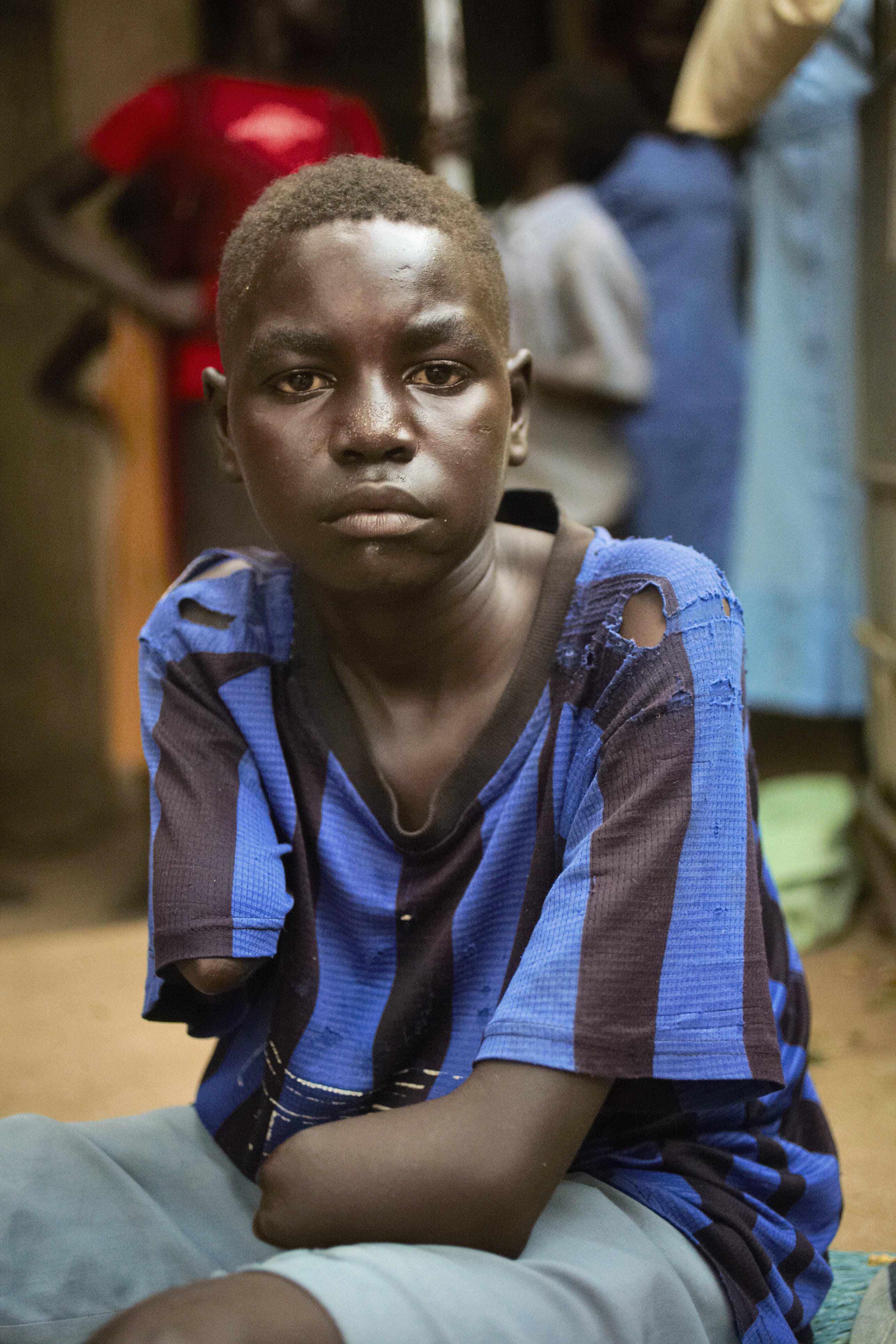 As a medical volunteer, Dr. Tom calls this place home. He’s been serving the people of these mountains for the past 17 years. He works at the Mother of Mercy Hospital with an unyielding commitment to his Catholic faith. Without electricity, running water, or essential medical equipment and with constant, deadly threats of violence, Tom Catena remains in Sudan. When asked why a doctor educated in one of the top medical schools in the United States chooses to live under these perilous and challenging circumstances Tom responded:

My decision to stay here was a simple one. As the only doctor at the only major hospital in the Nuba Mountains, I could not leave in good conscience. Also, as a lay missionary, I felt it was very important to show the presence of the Church in this time of need – that the Church does not abandon her people when a crisis arises. 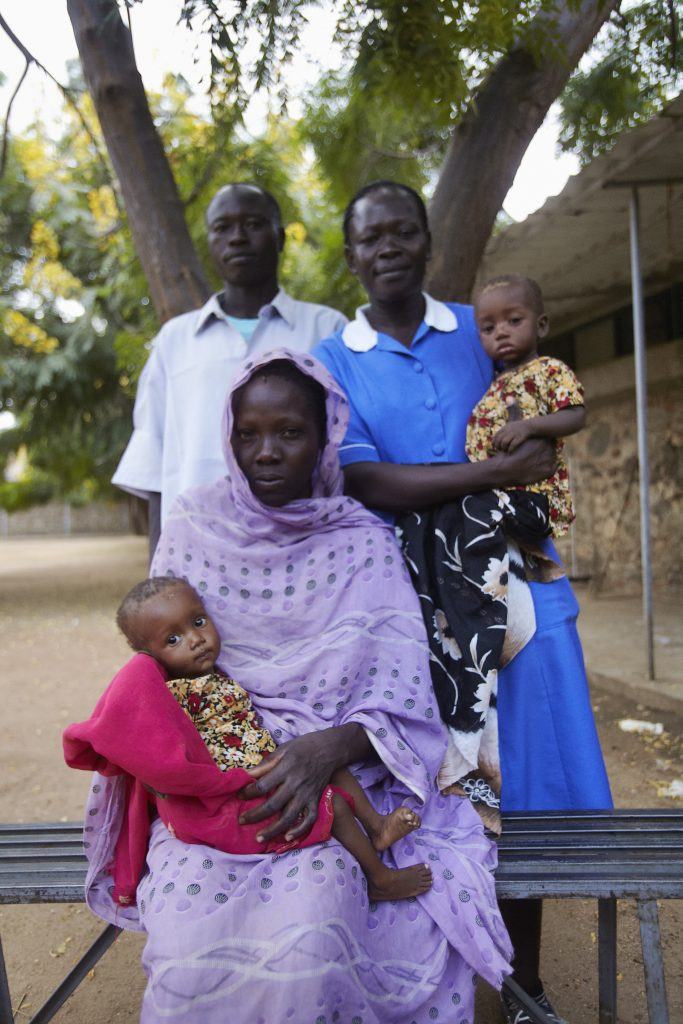 Because of his unrelenting commitment to serving the most vulnerable and his willingness to place the lives of others before his own, Dr. Tom Catena has been chosen as a finalist for the Aurora Prize for Awakening Humanity, now for the second year in a row.

The Aurora Prize for Awakening Humanity was founded in 2015 on behalf of the survivors of the Armenian Genocide. The Aurora Humanitarian Initiative seeks to empower heroes like Dr. Tom, who offer compassion and hope to those in desperate need of lifesaving humanitarian aid and continue the cycle of giving internationally:

On behalf of the survivors of the Armenian Genocide and in gratitude to their saviors, an Aurora Prize Laureate will be honored each year between 2015 and 2023 (in remembrance of the eight years of the Armenian Genocide 1915-1923) with a US$100,000 grant as well as the unique opportunity to continue the cycle of giving by nominating organizations that inspired their work for a US$1,000,000 award. Recipients will be recognized for the exceptional impact of their actions on preserving human life and advancing humanitarian causes.

The co-founder of the Aurora Humanitarian Initiative explains, “Underpinning the Aurora Prize is a desire to pay tribute to those who have dedicated their lives to help others survive and thrive.”

This year’s finalists, including Dr. Tom, were chosen from over 250 distinguished nominees, each demonstrating an inspirational commitment to advancing humanity around the world.

The Man Behind the Miracles

Dr. Catena is a native of Amsterdam, New York. He attended Brown University where he played college football and earned his undergraduate degree in mechanical engineering. Following his time at Brown, Dr. Catena worked toward his medical doctorate at Duke University on a U.S. Navy scholarship.

In 2015, Dr. Catena was featured in a New York Times column where he joked that he missed pretzels and ice cream, but mostly his family. His humility is astonishing. He wears a bracelet that says “John 3:30” –  the mantra by which he lives his life each day:

In a speech addressing the 2015 graduating class at Brown University, Tom’s challenge to them highlighted how one can live this mantra:

Everyone is in search of happiness. Everybody is in search of fulfillment. I think if you really want fulfillment in this life, what I would suggest to you is go and get rid of everything you have.  Sell everything you have.  Get rid of all of your baggage and go live a life of full and total service to other people. I think if you do that, you will find that the rewards are incredible.  You will find that you have fulfillment more than you could ever have imagined.  So I throw that challenge out to you. 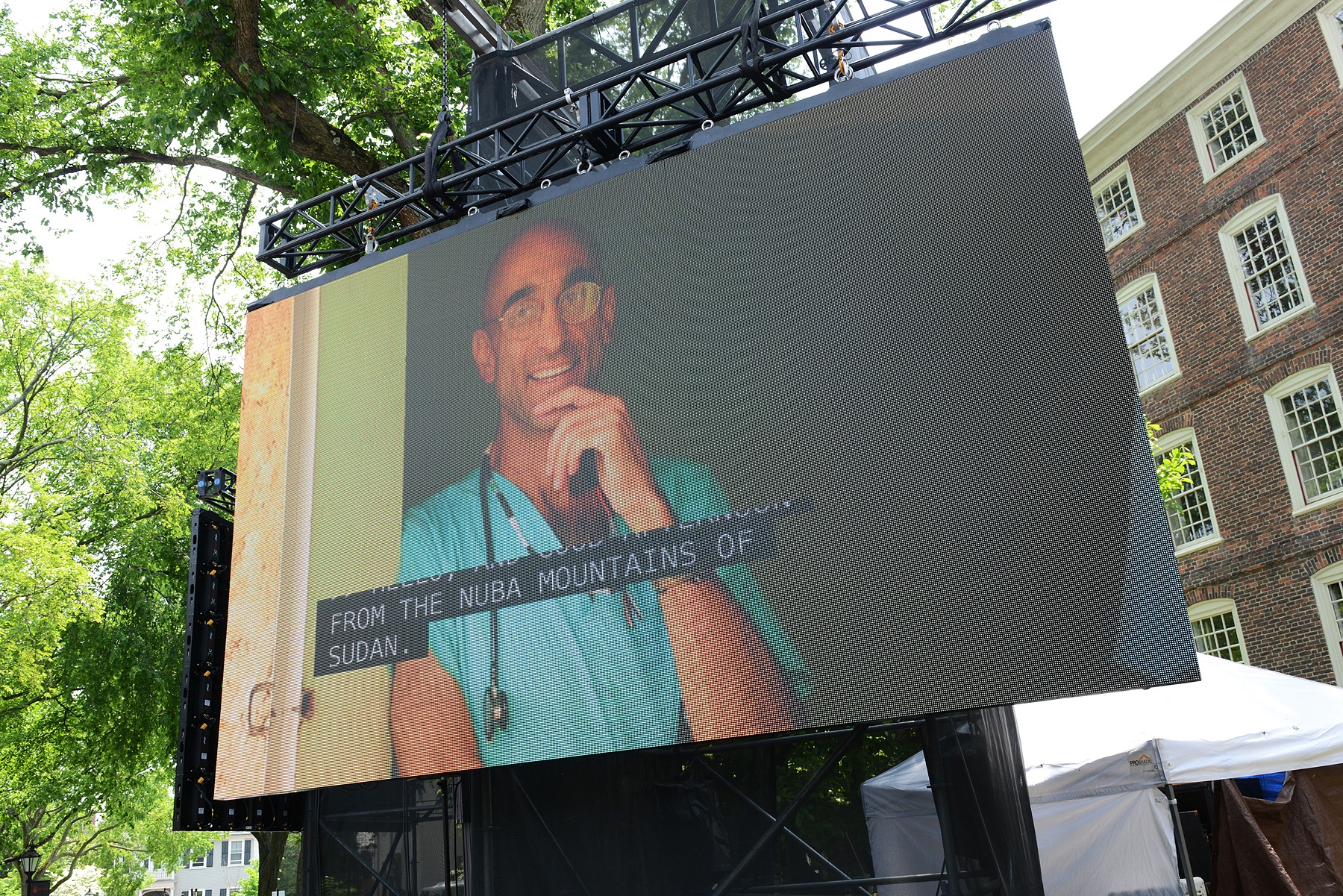 Dr. Tom Catena first came to CMMB as a medical resident in the late 1990s where he served on short-term, volunteer mission trips. He spent one month in Guyana and then another month in Honduras.

Throughout his time completing his Navy commitment and his post graduate residency, Dr. Tom always came back to his desire to do mission work, “I was looking for organizations that would sponsor doctors, and that’s when I came across the Catholic Medical Mission Board.”

So when he completed his residency in 1999, he decided to continue volunteering with CMMB. This time, he was placed at the Mutomo Mission Hospital in Kenya where he spent the next two years.

Anita McTernan had the pleasure of volunteering alongside Catena during his time at Mutomo Mission Hospital. She reflected fondly on her time working with him:

I remember working with Dr. Tom when he started as a volunteer. He was such a role model for people who are here to make a difference. Tom didn’t have any schedule as such. He worked all day, every day. He even worked all night if a patient needed him. I was a volunteer at that time as well, so I was very impressed by Dr. Tom and CMMB. I will always remember him as a very hard worker. He is a man who is really dedicated to helping people.

When his term of service at Mutomo Mission Hospital ended, Tom decided to extend his mission trip. He moved from Mutomo to Nairobi and began volunteering at St. Mary’s Hospital, where he stayed for six years.

In 2007, Dr. Tom’s dedication and commitment to providing medical care to the most marginalized brought him to southern Sudan where, together with the Diocese of El Obeid, he helped establish the Mother of Mercy Hospital in the Nuba Mountains.

The most rewarding part of the job is seeing sick people get better.

For Catena, who lives with his staff in a concrete building near the hospital, a typical day starts at 6:30 with morning Mass. He begins rounds at 7:30. The hospital has 300 beds, but sometimes there are so many patients they must sleep two or three to a bed. On some days there is no water; on others, no electricity. “You get worn out,” he says. “You get tired. You get frustrated.”

Catena remains on call throughout the night. With no administrative staff, he also uses the evenings to order supplies and keep patient records up-to-date. Despite the fatigue and the stress, he persists. “Some days are better than others,” he says. “I enjoy the work, but some days it is drudgery. Whether terrible things happen or whether we are in danger or there is no food, the idea is we are here to serve. It is as simple as that.”

His very first volunteer commitments to CMMB have turned into nearly two decades of service to those who truly need him most. Today, 17 years after first arriving in the Sudan, Dr. Catena, affectionately known as “Dr. Tom” by all the residents of the area, continues to serve as the only doctor for 750,000 people. On a typical day, he treats up to 400 patients, working 24 hours a day, seven days a week.

“He’s Jesus Christ. Just like Jesus raised the dead, healed the sick, and gave sight to the blind, Dr. Tom also does this. And all Nuba people share this view.”

In a quote from the documentary film, The Heart of Nuba, created by one of Tom’s Brown University football teammates, he says:

It is very important to touch these people. In the west we are taught almost a standoffish behavior with the patients… the doctor-patient relationship is very formal. But I think to joke with the patients, to touch them is very important. These are people who have been rejected by society. They watch their bodies disintegrating. If you can come and touch them, shake their hands, pat them on the back, joke with them, you know, put them in a full nelson and wrestle them around a bit…you know, they are part of the human race, like anybody else.

Through our pharmaceutical donation program and with financial, material, and other logistical support, CMMB continues to support Catena and the 300-bed Mother of Mercy Hospital.

Recognition of a Life of Service

Within the global CMMB family, we recognize Dr. Tom as a hero. His legacy of compassionate care, selflessness, and personal sacrifice has been internationally recognized. He was one of Time Magazine’s 100 Most Influential People. Now, for a second time, Dr. Catena has been nominated to receive the prestigious Aurora Prize for Awakening Humanitarian.

Recipients will be recognized for the exceptional impact of their actions on preserving human life and advancing humanitarian causes. 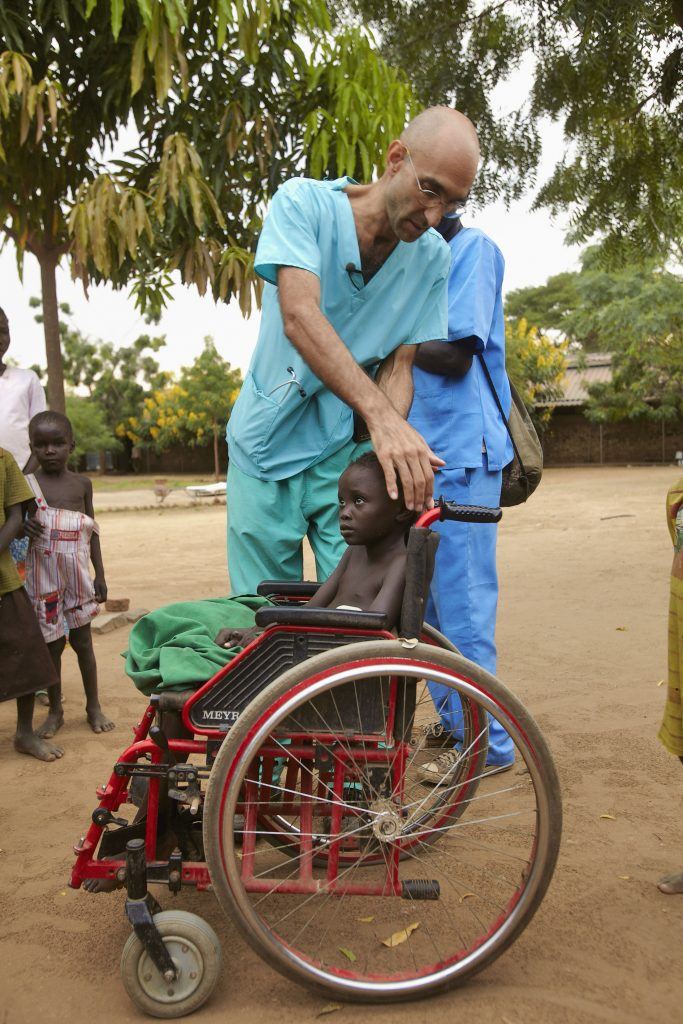 Dr. Tom Catena is one of CMMB’s volunteer heroes. He epitomizes the Aurora Prize’s three virtues of courage, commitment, and impact. With great compassion and deep faith, he stands as a bulwark against tyranny and his self-sacrifice is a beacon that continues to inspire people around the world. Through our volunteer program, CMMB is privileged to be able to serve women and men like Dr. Tom who in turn, selflessly serve the world.

We are all children of God. And we do have an obligation to look after our brothers. Every single person can make a contribution, somehow. – Tom Catena